You're too kind Neelie 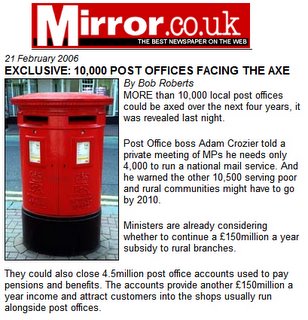 This week, there has been much ado about the threat to close upwards of ten thousand rural post offices, causing much distress to their customers.

The story was broken by the Daily Mirror on Tuesday, after questions had been raised by "Post Office boss" Adam Crozier about the fate of the annual £150 million subsidy paid by government to keep the post offices open.

Now, courtesy of The Scotsman, we learn that the munificent European Union has stepped in, earning itself the headline: "EU's £150m lifeline will save rural post offices from closure".

Casual readers might think that the EU has actually coughed up with some money – not that it is theirs to give anyway – but scrutiny of the story reveals the sad truth. The "EU lifeline" is nothing more than approval given by the EU commission to our own government, so that it can spend our money on the post office subsidy.

Before British ministers could expend this money on a vital social service, they had to go grovelling to Brussels in order to convince the commission that the subsidy did not amount to "unfair state aid".

So much for the might of the United Kingdom that it thus depended on Dutch EU commissioner Neelie Kroes, who runs the competition portfolio, to give her gracious permission, which indeed she has, stating, "I am satisfied that the funding is proportionate to POL's public services obligation. I am happy to endorse a measure which will benefit British consumers in rural areas without distorting competition."

You're too kind Neelie.