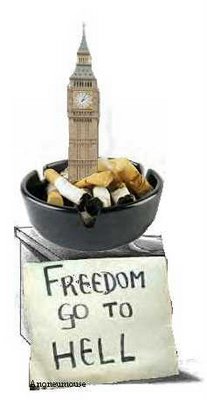 We live in an increasingly bizarre country. It is acceptable, and certainly legal for homosexuals to kiss each other in a bar but, in a few months time, they will be committing a criminal offence if they light up afterwards.

If they go outside to smoke, no doubt the litter police will be there to issue them penalty tickets if they are incautious enough to discard their butts on the pavement between embraces.

This is a country where the police penalise people for gesturing at speed cameras and prosecute them for calling a horse "gay", yet will tolerate Muslim extremists parading down the streets of London carrying banners which incite hatred and murder.

Believe it or not, this is a country where it is actually a criminal offence to call your loved one on a mobile phone, to tell them you are going to be late, when you a sitting at the wheel of a car, stalled in a traffic jam on a motorway, with your car's engine switched off.

This is a country which bans Olympic pistol marksmen (and women) from practising their sport, which makes it a crime for people to own a television without first paying a tax to a broadcasting élite which has long since ceased to make programmes they may want to watch.

This is a country that bans the age-old tradition of hunting foxes with hounds, and prohibits farmers from shooting diseased badgers on their own land yet, when those animals pass the disease to their cattle, destroys only the cattle - at enormous cost to the taxpayer.

Since yesterday, we are closer to living in a country where it will become compulsory for people to pay the State an exorbitant fee to enter their private details on a computer database and take possession of identity cards.

From tomorrow, when MPs vote again, we will be a step further down the line to a country which bans schools from dictating their own admission policies and thereby selecting pupils on the basis of academic achievement, even to the extent that they will not be allowed to interview prospective pupils.

These, and many more infringements on our liberties, are turning this country into a place where I feel a stranger and where I no longer want to live.

And we are worried about the encroachment on our freedoms by the EU? But then, somebody has to articulate that concern, I suppose. Come the revolution, though, it will not just be the Eurocrats swinging from the lamp posts.