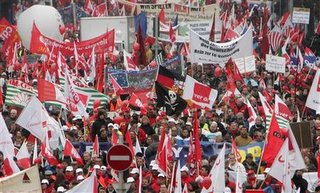 If, over the last couple of days, you have been watching media coverage of Euro-land, you have a right to be confused, writes David Rennie for the Telegraph.

He is, of course, referring to the recent passage through the EU parliament of the Services Directive and the climbdown by MEPs, which has led to conflicting claims as to the importance of a measure that has largely been eviscerated.

Actually, though, we are not so much confused as bored witless. Even to suggest that the serpentine proceedings of the EU invoke about as much interest as paint drying is grossly to exaggerate their dynamism. Reporting on them is about as attractive as chronicling the stages of the rotting of a corpse. We all know it happens by few people want to watch it.

That we are looking at a corpse – the decaying remains of the Monnet vision of European unity – is more or less confirmed by the Telegraph leader. This reminds us that freedom of movement for services is among the principles of the Treaty of Rome, the founding document of what is now the European Union.

Signed in 1957 and still at the heart of the current treaties, this embodies the principle of outlawing discrimination on national ground. To that effect any one member state imposing restrictions on the provision of services by other members has been contrary to the treaties – and therefore unlawful - for nearly fifty years, of for whatever period individual member states have belonged to the Union.

That the EU commission ever saw the need to produce a specific directive to force the issue, therefore, says legions about the commitment of member states to the process of integration. Effectively, they are all for it until it affects the interests of their populations to the extent that there is real, popular resistance – whence national politicians dive for cover and opt for the quiet life.

It was this phenomenon that we noted in our commentary on the ports directive, where we expressed the view that the great European experiment was reaching the limits of integration. 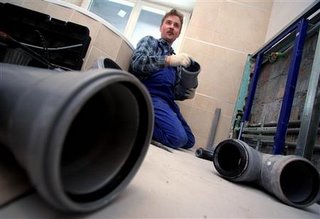 How interesting it is that the resistance stiffens once the effects of integration become visible, thus underlining the essentially anti-democratic nature of the "project" although it is doubly interesting to see scandalised European politicians refer to the rejection of their ideas as "populism".

Anyhow, the process of rotting is a cumulative process and, in the early stages, the corpse is still recognisable for what it once was – so we will continue to see elements of the integration process struggle up for air, like maggots emerging from the flesh, but the experiment is all but over. The world has moved on and no one can anymore see the link between allowing Polish plumbers free access to the market and keeping Germans from slaughtering Frenchmen, or vice versa.

Should I still be alive to see the final collapse, and be able to record the turning points, one of those will be seen to be the emasculation of the Services Directive. May it rot in peace.