Egypt did it first 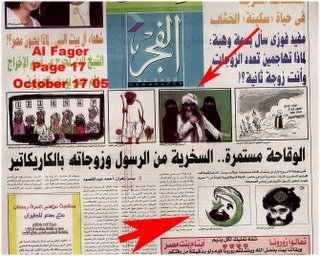 The strongest possible evidence to support the growing conviction that the "Cartoon Wars" are a politically motivated crisis has been supplied by two Egyptian blogs: Egyptian Sandmonkey and Freedom for Egyptians.

They both report that the Mohammed cartoons, first published by Jyllands-Posten on 30 September last year were republished by the Egyptian Newspaper Al Fagr back on 17 October 2005, during Ramadan, for all the Egyptian muslim population to see. The headline reads: "Continued Boldness. Mocking the Prophet and his Wife by Caricature."

The Egyptian paper critcized the bad taste of the cartoons but it did not incite hatred protests. The Egyptian blogs observe: "not a single squeak of outrage was present", adding that Al Fagr isn't a small newspaper either. It has respectable circulation in Egypt.

The publication was long before the republication of the cartoons in Norway, which is supposed to have been one of the factors that triggered the current wave of violence. Thus, Freedom for Egytians definitely sees this as "a sign that this violent response to the cartoons is politically-motivated by Muslim extremists in Europe and the so-called secular governments of the Middle East". The blog adds that, despite the fact that all editors who tried to reprint the cartoons in the Middle East nowadays were arrested, the Egyptian editors went unharmed.

One hopes that the US authorities will factor this into their investigations and we have to observe that it is the blogs, once again, that have broken the story, leaving the MSM floundering in their wake with their pathetic snivelling about publishing the cartoons.

And what happened, one might ask, to all these overpaid Middle East foreign correspondents, who are supposed to be keeping their fingers on the pulse?