The truth is stranger than fiction… sometimes 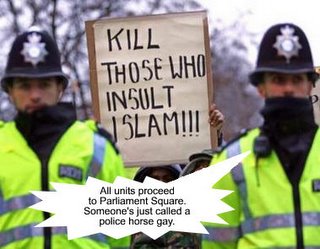 When we published this picture(swiped from Drinking from Home) - the explanation for which is detailed here - little did we know that it was going to be reproduced on Coppers Blog, only to invite the following comment:

The picture is actually quite funny because I was there at the demo on Saturday in full riot gear, waiting for it to go pear shaped. We actually had to blue light it to Parliament Square because 3000 New Zealanders had descended to celebrate the Haka which was being performed in the square. So there was I and the rest of my serial, in full riot gear, directing traffic so Kiwis wouldn't get run over, whilst 2000 angry protestors were around the corner shouting at the Dutch (Danish actually) Embassy's front door.

From further comments, something tells me that our boys in blue are not treating insults to horses with the gravity that the Oxford police obviously think they deserve, hence one commenter asking: "Did anyone check whether the horse was gay?? The horse may have been and therefore not offended!!"

The stern reply was: "It doesn't matter if the horse was offended or not, as long as any person perceives there to have been a hate crime towards it: 'Homophobic Incident' - Any incident which is perceived to be homophobic by the victim or any other person. The horse will be provided with a duty Vet, and victim support, but if it was gay, it might decline."

So now you know.