A spy in the camp 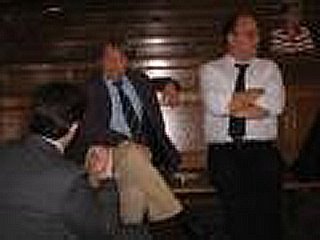 Headed by one Mark Croucher, former Labour activist, its staff was enhanced by the addition of another activist after the Party shot to fame and glory in the Euro elections, a certain Stephen Sobey, who also styles himself the Honourable Stephen Sorbey-Nevill.

The Hon. Stephen however, seems somewhat camera-shy and the only shot of him in existence on the UKIP site has since been withdrawn – not that it was any use anyway, as this recovered image shows. Sobey is the one with his back to the camera (although another photo has come to light - see right).

Now – in the best tradition of all good spy novels - it appears that there was good reason for Sobey's reticence. Having now left the "employ" of UKIP, he has rejoined his original employers, Conservative Central Office, leaving his days as a Tory mole behind him.