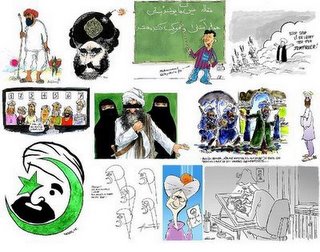 However, the "cartoons" turn out to be a facsimile of the original page from the Danish paper Jyllands-Posten (illustrated), in which all twelve cartoons were published, on 30 September. The image is one column wide and about two-and-a-half inches high, on page six of today's paper, in an article about the weekend protests against the cartoons across the Islamic world

In an editorial accompanying the column, entitled "The Prophet's Honor", the paper contrasts the outcry that the Danish cartoons are causing in the Muslim world, while "Arab cartoonists routinely demonise Jews as global conspirators, corrupters of society and blood-suckers". 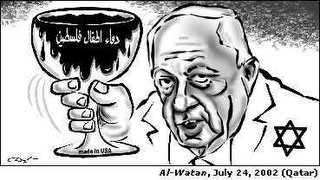 "Arab political 'humour' knows no bounds," it says. "A cartoon in Qatar's Al-Watan depicted prime minister Ariel Sharon drinking from a goblet of Palestinian children's blood. Another, in the Egyptian Al-Ahram al-Arabi, showed him jackbooted, bloody-handed and crushing peace."

The editorial adds: "There are those who would argue that the controversy does not reflect a clash of civilisations. Yet it is precisely this persistent refusal to acknowledge the obvious that weakens the cause of tolerance and liberty. Must 'understanding' invariably result in the abdication of western values?"

"If anyone wants to appreciate why the west views with such suspicion the weapons programmes of Muslim states such as Iran, they need look no further than the intolerance Muslim regimes exhibit to these cartoons, and what this portends."

"No one wants to add fuel to the fire. Mobs are more easily placated than reasoned with. But once this controversy passes it will be valuable to determine just who exploited the flap to foment anti-Western outrage, and to inquire what 'moderate' Muslim voices said."

"Globalism demands that points of contact between Islam and the west be multi-cultural havens, not flashpoints. For that to happen, tolerance must be a two-way street."