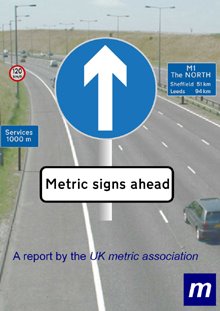 The UK Metric Association was having a ball yesterday, urging the government convert all road signs to metric in time for the 2012 Olympics. Typically for the genre, it argues that failure to do so risks Britain being seen as a backward nation clinging to an awkward and outmoded measurement system.

Quite why this "failure" – or, more accurately, refusal – to adopt an arbitrary system of measurement devised during the French Revolution and imposed at the point of a gun by Napoleon should be so devastating is hard to see, especially as the richest economy in the world remains staunchly Imperial.

Anyhow, The Times suggested that any changeover could be an "Olympic task" as the Department for Transport claims it would cost £750 million to install new signs and £10 million to publicise the change.

This is disputed by the Metric Association, which believes that it would cost only £80 million, or 0.27 percent of the annual roads budget, if the investment and conversion were spread over five years.

But their jewel in the crown is the Republic of Ireland, which converted its road signs to metric a year ago, increased its 70mph motorway speed limit to 120km/h, or 75mph. The 60mph limit on single carriageway roads became 80km/h, or 50mph.

The Metric Association reminds us that, while British transport ministers have tended to argue that a metric changeover would be confusing for older drivers and could result in crashes, this was not the case – they claim – in Ireland. 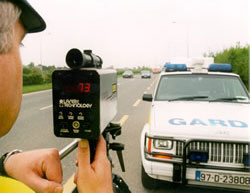 To support their case, they called in aid Ann Cody, the "road safety" official who oversaw the change in the Irish Republic. She said that there had not been a single serious incident in the past 12 months, adding: "There were many scare stories before the switch, but the danger never materialised."

Er… what price then The Irish Times which on 21 December 2005 reported that in a reversal of the long-term trend, road fatalities had gone up dramatically for the second year running.

And, while Garda figures showed that 2005 was the worst year for fatal road accidents since 2001, when 411 died, what is especially significant is – according to the Irish Examiner - that, despite a reduction in the speed limit, following the conversion to a metric system, the incidence of speeding on regional roads increased dramatically.

Looks to me that the Irish took er… an Irish view of the new signs, taking the new signs at face value – the face of their existing speedometers, calibrated, of course in miles per hour. It seems also that, contrary to what its advocates claim, metric kills.