Some of our Army is missing 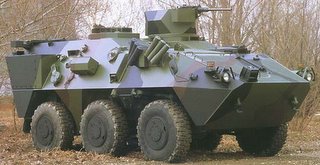 Pointing a dagger at the heart of the somewhat tattered Belgium military is a story, courtesy of Defense Industry Daily, that you just could not make up.

It seems, according to DID, that a full quarter of Belgium's inventory of Pandur armoured personnel carriers – the pride of its army – have er… gone missing, together with radio equipment, MAN trucks and, quelle horreur, some field kitchens. They were part of a consignment of over 100 UN vehicles, all painted white, worth some $20 million.

The equipment was being despatched by the Belgian government to join the UN force in the Congo for use by the Beninese battalion stationed in the country. 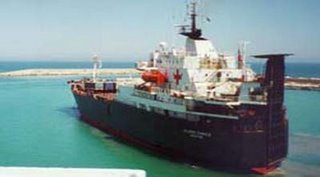 It left Zeebrugge on 3 December on board a ship, appropriately named the MV Eurocarrier, chartered for the UN and headed for the Congo. Unfortunately for Belgian pride, the ship, under the flag of Saint Kitts & Nevis, never actually arrived. It now transpires that, four weeks ago, it was seized in a port in Equatorial Guinea.

According to a local report, the captain of the Ukrainian-managed ship made an unauthorised stop in Malabo, Equatorial Guinea, to deliver some construction equipment which he had picked up in the port of Anvers "to make profitable his trip".

The Guinean authorities, seeing the military equipment on board immediately suspected that that a coup d'etat was being planned. Despite the fact that all the vehicles were painted white and had UN markings, they were not convinced by the manifesto documents and promptly arrested the four Beninese soldiers guarding the cargo, also putting the 23-man ship's crew under "house arrest".

Following up the trail of the missing vehicles and equipment, UN SecGen Kofi Annan has contacted the president of Equatorial Guinea but, it appears, he is having no more luck that he had with his Mercedes. Reports note that "these talks did not yield much result," and it is now feared that the Pandurs and the rest of the equipment have been stolen. In fact, according to local reports, it could already have been "distributed between the military tribe".

Strategy Page says this sort of thing is not unusual for Equatorial Guinea.

Last year, Mark Thatcher was forced to pay a $500,000 fine to get out of the country. He had earlier been arrested and charged with attempting to overthrow the government. There's certainly a need for that, adds SP.

Equatorial Guinea has been ruled, since 1979, by dictator Teodoro Obiang Nguema Mbasogo (who inherited the job from his uncle, via a coup.) Obiang has grown increasingly paranoid and unstable of late. That is because oil was discovered in the 1990s, and that produced more money than has ever been seen before in the tiny country of only 600,000 people. Obiang has stolen most of the $700 million in annual oil income, handing out enough of it to cronies to keep himself in power.

You will be pleased to know that the UN is now negotiating with Mbasogo and is looking for a "diplomatic solution". God help us though if the UN is ever put in charge of arrangements for the European Rapid Reaction Force.