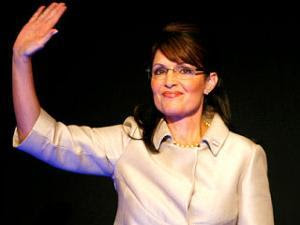 About the only sour note in the "right wing" press on Sarah Palin's stunning speech comes – entirely predictably – from Charles Clover, the environment correspondent of The Daily Telegraph.

Morosely observing that she attacked Bonto (Barak Obama – Not The One) for "wasting his time turning back the waters and healing the planet", he ruminated that "no one could accuse her of that".

The online version of Clover's piece is headed "Pit-bull Palin, enemy of the greens, could be McCain's Achilles heel", and that says it all. In the eyes of Clover, and the rest of the GWGs (Global Warming Groupies), Palin is a BAD THING because, she not a believer.

Not only that, Palin is a despoiler of the planet, which – in Clover's eyes – means "trouble". "Who said America's isolation on environmental issues would be over with the election", he asks, betraying that ovine tendency of the warmists, their love of "consensus" and their absolute dread of isolation.

What Clover does not realise is that the tide is turning - and Palin is the living embodiment of that change. Look to the dire Spectator Coffee House clog yesterday, picked up independently with glee by Waendel and Purple Scorpion.

They both report that writer Sean Martin trotted out the usual leaden received wisdom on the melting of Arctic ice, intoning that, "The event serves as a prescient reminder to politicians that climate change is an ever burning issue…" - only to be comprehensively trashed by the commenters who piled in on the piece.

Significantly, in yesterday's Telegraph Mary Riddell captured something of that mood, noting:

Citizens want, and deserve, some clarity. Where Americans now have a stark choice between the liberal prospectus of Barack Obama and McCain's hawkish tomorrow, here there is no such distinct alternative. Partly, and thankfully, that's because we are less extreme. We don't burn abortion clinics or field candidates who, in Palin's case, make George W Bush look like Renaissance Man. But it's also because our politicians, huddled on the centre ground, have forgotten the preciousness of difference.

People are actually sick of the cloying "consensus" so beloved of the "colleagues" in Brussels – of the hair-shirt, torfu-spinning, sandal-wearing, planet-saving, eco-friendly preachers. They want some fire, someone who will offer an antidote to the doom and despondency, the sermonising and the dull diet of drivel that dominates the political centre ground.

Everywhere, the heresy is breaking out and the likes of Clover are being left behind.

Palin showed us what real leadership can do and she has electrified the US election campaign. There is a lesson here for Mr Cameron and other British politicians. Like Thatcher, Palin is not going for the centre ground – she is there to "kick ass" and the people love it.

Cameron may think he can win the election simply on the rebound from an increasingly unpopular and dysfunctional Gordon Brown and doubtless he can. But a victory borne on a tidal wave of apathy and loathing of the political classes is no victory at all. He may wear the crown but he will lose the hearts and minds of the people, gaining nothing but the trappings of office which will dribble through his fingers like dry sand into the pile of vacuity that British politics has become.