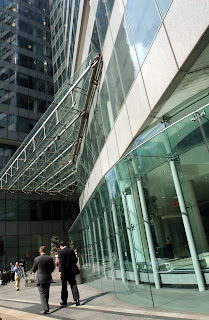 Soon enough, I wrote in March, "we will drown in the pile of excrement it produces, and the media will not even have noticed the smell."

The "it" of which I wrote was, of course, the EU, the specific context at that time being the regulatory shambles over the Northern Rock debacle. Now we are indeed drowning in the pile of excrement and, exactly as predicted, the media are totally oblivious to the stench pervading the corridors of power and our once admired financial institutions.

One of the principal cheer-leaders in the hall of shame, as always, is The Daily Telegraph offering an opinion piece from Philip Booth, editorial and programme director of the Institute of Economic Affairs, and a leader, both of which deal with the lamentable performance of the Financial Services Authority (FSA) - pictured.

Booth kicks off with the view that the FSA cannot do its job properly because it has an impossible job. "We need regulators," he add, "with some specific roles to step in to deal with problems that we all know we will get from time to time in financial systems. It is time to break up the FSA."

This is backed by the leader which clearly and rightly identifies role of the regulatory failure and notes that, in intervening so spectacularly in the current crisis, in which HBOS is at the epicentre, "the Prime Minister has effectively conceded that the regulatory regime he created in 1997 is not up to the job."

The tripartite structure, the leader goes on to say, "that divides responsibility between the Bank of England, the Treasury and the Financial Services Authority is clumsy, unresponsive, and lacking in real authority. As Mr Darling so painfully demonstrated, it leaves no one in charge of the clattering train." Thus does the paper conclude: "It must be refashioned for the difficult years ahead."

Yet, back in March, exactly the same complaint was being rehearsed, with the same criticism of that "tripartite system" of regulation, involving the Treasury, the Bank of England and the FSA. Then the criticism was being expressed in terms of its failure to identify potential problems at Northern Rock.

The reason why this might be is the failure (willful failure even) to recognise that this not a "tripartite system" but a quadrupartite system of regulation. It includes at its pinnacle the supreme authority of the European Union. The current system does not comprise three legs but four, the fourth being the European Union. This is what is known formally as the "4 level regulatory approach" which was pioneered in the 2001 Lamfalussy Report.

It is that very system which Brown adopted. The fatal confusion of responsibilities and powers which arise from it were largely responsible for the inadequate response to the Northern Rock crisis, and now it is that self-same system which is at the heart of the regulatory failures which have contributed massively to the HBOS crisis.

That the media seem incapable of seeing the role of this massive, stinking, wholly malign and corrupt elephant in the room is beyond a joke – if it ever was a joke. What is it about our political and chattering classes that they cannot see the blindingly obvious?