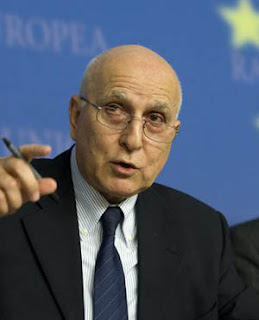 We do ourselves no favours on this blog, pointing out again and again, in as many different ways as we can devise, the simple but inescapable fact that much of our government resides not in Westminster and Whitehall, but in Brussels.

There is something about the political classes and the chatterati in general that they cannot deal with this. They are in denial, determined to ignore that reality carry on as if it was "business as usual". However, that they still behave as if London is the centre of government is not a pretence.

The dynamic is much more subtle than that – an absolute refusal to come to grips with the reality, acknowledgement of which would then require an acceptance that the UK government had in many policy areas become a marginal backwater of very little importance.

And, if there is one thing the self-important can never come to terms with, it is that they are very unimportant indeed.

The key element of this was the creation of super-departments with chief executives who acquired a huge tranche of delegated powers, making a vast number of decisions that were hitherto reserved for councillors, to be discussed and debated in committees and full council.

At a stroke, the bulk of local government shifted from political control to managerial governance. Councillors became, on many issues, largely redundant and council meetings were stripped of their meaning.

The response of the councillors was interesting. Instead of dealing with the deadly dull but vitally important issues of council management, they devoted more and more time to party political bickering, with heated debates about political issues which often had no relevance at all to council business.

Council meetings became theatre – hugely entertaining at first, if for no other reason than for their novelty value. Soon enough though, the novelty paled as we realised that so much of this was empty posturing. The politicians were left to bicker amongst themselves, largely ignored by the electorate who knew instinctively that their mouthings were devoid of meaning.

So it is with central government politicians. The equivalent of their Baines Report was the Treaty of Rome and the subsequent treaties, which gradually stripped them of many of their powers and turned political government of the UK into managerial governance, centred on Brussels.

The transition is not yet complete, as there are some policy areas which do remain as "competences" – in the modern jargon – of the London government, but most of the power has gone elsewhere.

A graphic illustration of this comes with yesterday's Environment Council in Brussels, which has produced a 26-page communiqué, stuffed with detail, agreeing initiatives of enormous importance to our daily lives, many with multi-billion price tags and timetables for implementation stretching into decades. It is well worth having a look at the document, just to appreciate the vast range of issues it covers.

Some of this was elaborated upon by environment commissioner, Stravros Dimas, in a speech yesterday to a conference in Brussels. Yet, despite the importance of the issues covered, such was the dullness and the lack of any personality recognisable to the British public, that the only media coverage I can find was in the official Chinese press agency Xinhuanet, and that was only a partial account.

On the eve of the Conservative Party conference, the British political hacks are far too busy to care. They are preparing themselves for the theatre, analysing and dissecting the personalities and readying themselves to write yards of extruded verbal material on their speeches.

If you asked them to identify the person in the photograph above, many of them would not have a clue. Yet, Stavros Dimas, as environment commissioner, is probably one of the most powerful politicians in Europe, using powers delegated to him by the Single European Act in 1984 when, with the approval of Margaret Thatcher, "environment" became an exclusive Community competence. Few though, have ever heard of him. Fewer still would recognise him.

Pointing this out, of course, is "raining on the parade" – or whatever cliché you prefer to use. But it doesn't stop it being true. In effect, all next week – as with the last few weeks of the conference season – we see the politicians and hacks children at play, while the real business of government carries on without them.

That fact though is so hideously uncomfortable and unpalatable that there will be no mention of it at all at the conference. To do something so indelicate is rather like farting in church – simply not done old boy!

Now that we've gone and done it, we can expect the chatterati to run a mile. Unfortunately for them, when they return, the smell will still be there. There is no escape and will be none until they accept the reality and deal with it. That is not going to be sometime soon.