Heads in the sand? 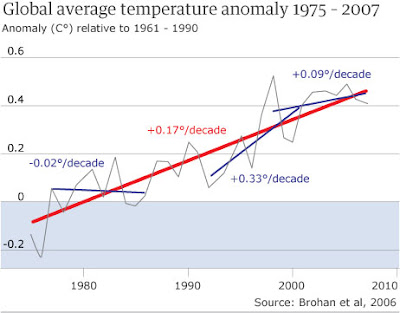 Something I missed yesterday was an article in The Guardian retailing the latest warmist orthodoxy from the UK's Met Office. According to the Met Office, climate sceptics such as Nigel Lawson who argue that global warming has stopped have their "heads in the sand".

The "evidence" for this highly scientific observation is a graph showing temperature trends from 1975, referenced Brohan et al. Tracking this back, one finds this is the Climate Research Unit dataset, developed in association with the Hadley centre, relying entirely on surface measurements.

The unreliability of such measurements has been well rehearsed, with significant evidence that attests that this dataset is the odd man out - compared with satellite readings.

A huge amount of work has been undertaken by Anthony Watts, recorded on his website, demonstrating the fragility of surface measurements and his latest post highlights the amount of manipulation to which even "pristine data" is subject.

Bearing in mind that the total shift recorded by Brohan et al is in the order of half a degree Celsius, it is seriously arguable that the inherent errors in the system are considerably greater than the changes being measured, notwithstanding that the entire methodology for calculating a single global temperature is highly suspect.

To build such a huge industry on the back of such fragile data is, to say the very least, tendentious. Then to accuse those who have the temerity to question the wisdom of so doing as having their "heads in the sand" smacks of desperation – or worse. Still, I suppose it is better than having your heads up your backsides.