A harvest of woe 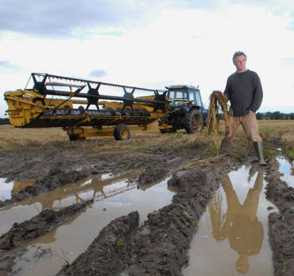 The metropolitan (i.e., London) Times newspaper has finally picked up on the disaster that is the British harvest this year, several weeks after we already covered it (and here), taking our lead from the regional and farming press and our own sources.

Some of the locals in farming areas are also covering it, notably in Northumberland and Cumbria and another national on the case is The Guardian. Only that paper – typically – brings in the red herring of "climate change", although even it does not have the gall to suggest that this summer was the result of global warming.

Interestingly, it is The Times which brings in subsidies telling us that the situation is so bad that farmers are demanding urgent payment of subsidies to alleviate their plight. We are told that Stuart Burgess, the Government's "rural advocate", is to ask the prime minister to bring forward payment of subsidies due in December under the Common Agricultural Policy.

That, of course, is as far as it goes, with no elaboration of the fact that this is the only option left to government to assist farmers in which is generally recognised as the worst harvest on record. And this is indeed of very little assistance. All it does is help out with cash-flow problems, but that has the effect of stacking up problems for later in the season.

The harvest situation is, however, a classic example of why the farming industry does need government support. No other industry is required to make and repeat huge annual investments, with huge sums at risk due to influences (the weather) entirely outside their control.

What people do not seem to understand is that many farmers could make more money from their land by not farming. If we want them to continue growing food, then there is an extremely good case for state assistance in underwriting their risk.

Before we joined the loathsome EU (or EEC as it was then – with, I might add, the full support of British farmers) the system was known as the "deficiency payments scheme", which effective underwrote a minimum price for crops. Had this applied now, farmers would be recouping some of their losses.

However, the current EU scheme is known as "intervention", which kicks in when there is a surplus, buying up the excess of top quality grain for storage, and thus maintaining price levels. This year, there is no such surplus which means that none of the EU funds earmarked for price support will be spent.

At the end of the year there will be a cash surplus not a crop surplus. Some of the money will go on funding the EU's vanity project, the Galileo satellite navigation system. A billion or more will go on handouts to farmers in developing countries, further destabilising their agricultural economies, and some many be returned to member states. And more British farmers will go broke.

That, ladies and gentlemen, is the EU for you. Aren't we lucky we are members.