This is one we missed 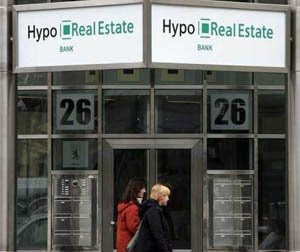 While all attention here has been focused on the B&B rescue and the drama in Congress over the Paulson plan – to say nothing of Osborne's speech to the Conservative Party conference and, of course, the Fortis rescue – less attention has been given to events in Germany.

There, according to Deutsche Welle, the German government has been injecting "billions of euros" into troubled commercial property lender Hypo Real Estate (HRE). This, we are told, is the first German blue-chip company to seek a bailout in the global financial crisis.

The German Finance Ministry in Berlin is reported to have said it had provided HRE guarantees for an emergency credit line totalling €35 billion (about £25 billion), although there are no plans to nationalise the bank. A spokesman for the finance ministry said the commitment was needed so that [other] banks could bail out HRE.

In different times, this might have made front-page news but such is the torrent of financial news that it is hardly surprising that it has been given less than star treatment by the bulk of the UK media.

To be fair, The Times has picked it up, together with the news of Glitnir, "the struggling Icelandic bank". This was partially nationalised today as the Icelandic Government bought a 75 percent stake in it for €600 million (£478 million) "to ensure broader market stability".

The Icelandic bank move was not unexpected but problems with HRE were not widely signalled. The Times has Bundesbank, and financial regulator, BaFin, confirming that they were involved in the efforts to bail out HRE, and has their spokesman saying: "The Bundesbank and BaFin now assume that Hypo Real Estate Group is secure."

On the other hand, Kiri Vijayarajah, an analyst at Citigroup, counters: "Hypo Real Estate also has other problems. It has exceptionally high leverage, which may no longer be viable. Also, we believe it is likely to experience losses on real estate loans, causing more damage to earnings and capital."

When blue-chip German banks start feeling the strain, it is time to wonder where it is all going to end.