The instrument of destruction 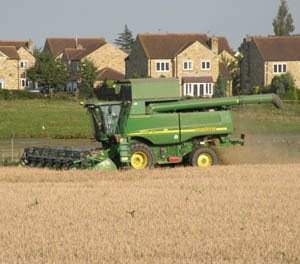 This blog has been pretty consistent over term in rejecting the political hyperventilation over Gordon Brown's leadership challenge, predicting that nothing substantive would happen over the conference.

Further, we hold and have held that Brown will lead the Labour Party into the electorally mandated reshuffle general election in May 2010. What happens then is anyone's guess but, even at this stage, we would not be prepared to bet the farm on the outcome.

One prediction we are prepared to make, however, is that one of the most vital issues to the health and prosperity of this country – the fate of our agricultural industry – will not be discussed at the Labour Party conference nor at next week's Tory bash.

We would hazard a guess, though, that if a fraction of the energy spent on idle speculation over Brown’s future had been devoted to this issue, it probably would not have made a blind bit of difference.

Agri-policy is an exclusive EU competence, which renders political discourse in the UK somewhat otiose – one of the many subjects "off limits" to the British political classes, simply because they cannot bring themselves to recognise how much power has been given away and how little they actually control.

This, of course, is one of the reasons why this chatterati indulge in their facile political soap opera. It gives them the feeling somehow of being engaged in the political process, when dealing with real issues would bring home to them that it really has become an empty charade in so many areas.

But, just because the chatterati isn't talking about it does not mean that it is not important, or that the people with real power are not – they are.

In fact, they were gathered over the weekend in the provincial town of Annecy in South East France, a meeting recorded by Reuters and very few others, where a "shopping list" of key priorities for the next round of the interminable CAP reform process was discussed.

The word "reform" is in fact what the EU commission now chooses to use publicly but the real agenda is destruction, the "colleagues" having long tired of dishing out variously forty percent of their budget to something less than three percent of the working population.

On the agenda is that buzz word "modulation", barely understood even on the margins of the agricultural community and not at all by the chatterati who would not wish to soil their brains with such irrelevancies.

Having been on the agenda for some time, discussed earlier on this blog, it seems that this is shaping up to be the final instrument of destruction of the subsidy system.

As we set out in that earlier piece, this is a mechanism for top-slicing payments to farmers and diverting them to more fruitful (to the EU) projects, where they have greater control and leverage.

We no learn that a deal is being drafted for October, with a final agreement being stitched up for mid-November – at which British farmers will almost certainly be shafted, without the MSM either noticing or caring.

Head stitcher will be agriculture commissioner Mariann Fischer Boel, who will have to do a Faustian deal with Sarkozy – which will mean French farmers getting more money – in order that she can pursue her agenda, winding down the "old-style" farm support schemes such as the intervention scheme, and production subsidies.

That will leave the commission even more money to spend on pursuing its own ambitions for political integration and, effectively, leave EU member states without a coherent agricultural policy.

The eventual demise of the CAP will be little-lamented, having attracted few friends or allies, but the answer to a bad policy is not no policy at all. In 50 years of European integration, however, that is all that has been achieved – the transition from bad to virtually nothing, leaving a massive vacuum that bodes no good for us all.

And, although we will still see combines in our fields (this one in Yorkshire over the weekend, finishing off the harvest), they are about to become an even rarer sight than they are now.