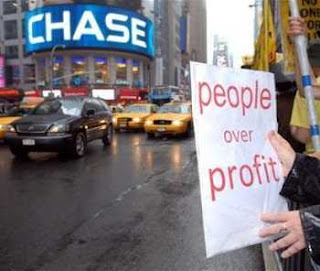 On the whole I find economics either very hard to understand or something that is just a matter of common sense. As a consequence, I try not to write about it and this posting will not give you my (somewhat inadequate) opinions on what is going on.

Instinctively, I side with those people here and in America who are against the famous bail-out plan, which has undergone some minor restructuring. I am against nationalization of banks and more government interference in business.

Politicians, in my opinion, know very little about anything, even politics. They are full of envy of those who do know things and can do them. When they look at people in the City or on Wall Street playing around (as it seems to those in the Westminster bubble or within the Beltway) with billions of pounds or dollars, their hands start itching. Without understanding anything about financial matters they want to move in there and play with those billions themselves. What usually happens is a disaster.

Therefore, I have been quite interested to read ever more references to the Clinton-era Community Reinvestment Act and the pressure that banks and mortgage companies have been under to ensure that people who could not afford to buy their own homes should, nevertheless, be allowed to do so on loans they could never repay. It seems that the people who pushed this insane measures through are largely behind the bail-out now. Interesting.

An article on American Thinker gives a good summary; there are links and postings on Michelle Malkin's blog (she is, needless to say, vehemently against the bail-out); numerous references on Instapundit (Glenn Reynolds is less vehement but also sceptical); links and comments on the seriously non-vehement Volokh Conspiracy.

Make what you will of it all.

Another very clear expose from Roger Kimball. A supposedly right-wing friend railed to me toda about the Bush administration and how it has caused this disaster. I felt very smug when I pointed out that it was Clinton-era legislation that was at the bottom of it. Somehow, I do not think he was going to remember that till the next conversation.
Posted by Helen at 12:18