The mother of all failures 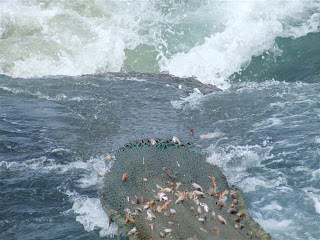 From the organisation that wants to sell you snake oil carbon credits (or, at least, make you pay through the nose for them) comes the stunning news that it plans to carry out a "full review" of its flagship Common Fisheries Policy, with the intention of proposing "major reform" by 2012.

Reform is required, says fisheries commissioner Borg, because "in its current form, the CFP does not encourage responsible behaviour by either fishermen or politicians." He adds: "The management tools we use reward narrow-minded, short-term decision-making, which has now undermined the sustainability of our fisheries."

Needless to say, the commissioners recipe for reform is just as narrow minded as the decision-making he is bitching about. Having presided over a system that insists on fishermen throwing back into the sea dead something like sixty percent of the fish they catch, he complains that that 88 percent of the bloc's fish stocks are overexploited and then attributes the problem to the fishing fleet being capable of catching "two to three times" the maximum sustainable yield.

Of course, if fishermen did not have to throw so many fish back, the fish stocks would be considerably healthier than they are now. And if fishing effort was managed day-by-day with temporary and seasonal closures implemented on the basis of real time information from fisherman, rather than one-year-old data from survey vessels test-fishing in statistically-assigned grids, stocks would be even healthier – capable of sustaining a fleet several times larger than it is now.

As it is, the fishing policy is neither science-based nor attuned to fisheries management. It is a political instrument designed to reconcile the competing demands for a resource to which all EU nations have access and for which no one bears any responsibility.

The policy, therefore, is fundamentally flawed and, as long as it is managed by the EU, will remain so. No amount of trimming round the edges, or "reform" will improve it. Hence the ultimate policy is, and always will be, to preside over the totally unnecessary decline in fish stocks then, tardily, to impose increasingly draconian measures to limit catches and finally to cut the size of the fleet.

Nothing changes and nothing will change. The CFP, in EU terms, is and always will be the mother of all failures (unless you count the CAP). And, being the EU, you can be assured it will have plenty of progeny to keep it company in its old age.