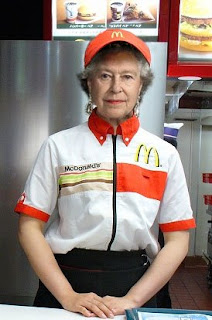 It really is a bit of a nerve for a newspaper which devotes its front page lead to a story proclaiming that "pregnant women to be offered flu jabs to protect babies" then to complain in its leader about the silence of the political classes on the financial crisis.

Under the title, "Britain must speak up at the trial of capitalism," it suggests baldly: "But isn't it time it [the government] at least launched a mature debate on this epoch-defining crisis?", having first cast an admiring look at the US where congress is locked in debate over the Paulson rescue package. This is "in glaring contrast to this country," it notes, "where there has been no recall of Parliament and the political classes appear tongue-tied".

Nevertheless, this is the same newspaper which consigns comment on the impending "energy crunch" and the sale of British Energy to EDF to the business section, with a remarkably illiterate piece by Damian Reece, which does not suggest that the newspaper begins to understand what is going on (we'll write more on this later).

That is not to pick on this newspaper in particular – they are all the same in their own ways – although it is interesting to note that The Daily Mail does offer as its lead story (online edition) Bush's warning that the world’s economy is in danger of meltdown, as does The Times, leaving The Independent to lead on the "black hole" in the royal accounts and the government's refusal to increase the Civil List. (However, things are not quite as bad as our picture suggests - yet.)

Funnily enough, the phrase "mature debate" appears elsewhere in the Telegraph, this time in a story about EU fines for missing "landfill targets".

There, in the context of meeting an EU requirement to cease using landfill, we see Michael O'Higgins, chairman of the Audit Commission, declaring that there needed to be a "mature debate" about waste, and that instead of Nimbyism people should accept the reality that incineration plants were needed.

There has, of course, never been a "mature debate" on waste – the issue was decided long ago at EU level and now our task is to roll over and build a vast network of extremely expensive incinerators to meet EU requirements. That is what O'Higgins means by the phrase.

Something we will not get, of course, is a "mature debate" on our previous story as that too has been decided for us, which means that any such debate will simply be - pace incinerators – how we go about complying with our masters' demands.

Therein lies our problem and confusion. Yes, we do indeed need a "mature debate" on all sorts of issues, not only in parliament but in the media – and also on the so-called political blogs. But does anyone know what the term means anymore? And when the power has been drained from our politicians to the extent that even if they discuss matters they cannot do anything about them, what is the point anyway?