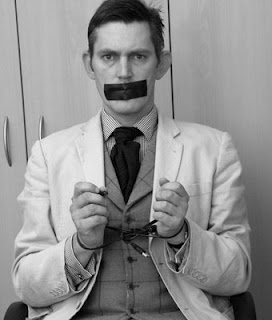 The EU parliament is on Thursday to vote on the Estonian Socialist MEP Marianne Mikko’s ideas for controlling blogs, a fact recorded by Bruno Waterfield in the online edition of The Daily Telegraph - but not important enough to make it to the print version.

In the meantime, one of our own, Gawain Towler (pictured) who writes from the EU parliament on his blog, England Expects, has fallen foul of that self-same freedom-loving parliament, which has now shut him down.

Towler heard the news yesterday when he was summoned by his secretary general and informed that a formal complaint had been made about one of his postings, following which his blogging activities were found to be in contravention of the staff regulations.

Thus, as a paid official of the EU parliament, albeit employed to act as press officer for the eurosceptic Ind-Dem group, Gawain was in breach of Article 12 which requires him to "refrain from any action or behaviour which might reflect adversely upon his position". More specifically, he was most definitely in breach of Article 11 which requires officials to carry out their duties and conduct themselves, "solely with the interests of the Communities in mind."

Considering that his job essentially required him to breach Article 11, it is hard to see how Gawain could actually do anything assigned to him but, perhaps conscious of the absurdity of this rule, the parliamentary authorities have chosen only to prevent him making any more posts on his blog.

The particular crime, it seems, was that not only was the blog eurosceptique but also ironique, leaving Gwain to wonder which was the worse transgression, the scepticism or the fact that he laughed at the EU.

Anyhow, the upshot is that he has been given a formal warning and if he continues to blog then "sanctions" may be applied. Given that the sanctions amount to upwards of a four month docking of wages, he really cannot afford to continue.

That, ladies and gentlemen is freedom of speech EU-style. Where they can, they shut down debate and, if they could, they would close it down on the blogosphere and everywhere else.

That is, after all, what Marianne Mikko's resolution would do if it could and only the limited power of the Eurocrats prevents them from attempting it. We are not dealing with democrats here.