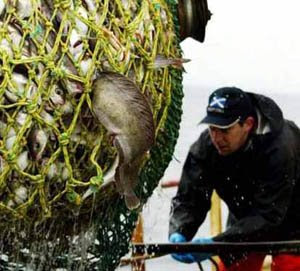 Right on cue, following the report that the EU is planning to "reform" the CFP, The Scotsman reveals that half of Scots cod catches are being thrown back into the sea

Described by fishermen's leaders as "a monumental moral disaster", this is a direct and inescapable consequence of the EU’s idea of fisheries management which in this case has led to a "staggering total" of 12,000 metric tons of marketable cod, with a potential value of £25 million, being discarded.

These data come from marine scientists at the government's Fisheries Research Service in Aberdeen. They show that, from a survey, carried out between January and June, 40 percent of landings of cod by weight are having to be discarded to prevent the fleet breaching the EU's quota restrictions.

At least 90 per cent of the catches are above the minimum marketable landing size, yet the above quota fish are being thrown back dead.

Unfortunately, it does not seem as if the fishermen have any better idea of how to deal with this issue than the EU. At a meeting involving industry representatives, scientists, environmentalists and policy-makers in Edinburgh next Thursday, the Scottish White Fish Producers' Association (SWFPA) will making its own pitch.

It will suggest that the Scottish fleet is given an increase in next year's cod quota in return for cuts in the number of days they spend at sea and fishing ground closures.

What it cannot suggest, however, is that the quota system is abandoned altogether – that being the bedrock of the CFP management system and thus beyond change – together with a total ban on "discards".

As we have been pointing out, most recently here, these measures together with the adoption of selective fishing techniques and a regime of "days at sea" controls on fishing effort, allocated by class of boat, would go a long way towards removing the obscenity of this waste.

However, as always, the EU is unable to respond, necessarily maintaining the core of a flawed system as the only such system which can be administered by a remote, supra-national authority controlling a multinational fleet.

At its heart, therefore, the CFP is irredeemably flawed because the EU is irredeemably flawed, which is why we will continue to see headlines of the type offered by The Scotsman and nothing at all will be done about then, other than continue cutting the sizes of the fleets as fish stocks contract as a result of the poor management.

The tragedy is that this mad-made and totally avoidable disaster exists only because UK politicians have neither the guts nor resolve to do anything about it. It is one of the prices we pay for continued membership of the EU – although paid by the fishermen and us, the fish buyers, rather than the loathesome politicians who so carelessly allow a valuable national resource to be destroyed.