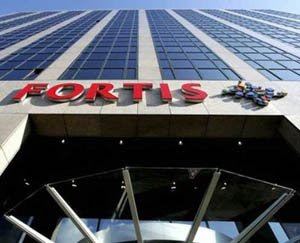 The story was moving so fast at the time of writing that different newspapers and agencies were telling different stories.

The latest, however, is that the Belgian-Dutch banking and insurance company Fortis is to be partially nationalised, with the governments of Netherlands, Belgium and Luxembourg taking over substantial parts of it.

That is the better part of £9 billion, making the Bradford & Bingley rescue - with that bank currently valued at about £290 million – relatively small beer. It is also the first major bank on mainland Europe to fail during this financial crisis, possibly marking a significant new step in the crisis, with European banks having been regarded as relatively insulated from the "credit crunch".

What is particularly interesting is the involvement in talks not only of national ministers, such as Wouter Bos, Dutch finance minister, and Nout Wellink, president of the Dutch central bank, but also the close involvement of Jean-Claude Trichet, European Central Bank president, together with Belgium's prime minister, Yves Leterme.

The Dutch EUX.TV remarks that the presence of an ECB chief at bank rescue talks is unprecedented and underlines the economic importance of the talks.

It is The Financial Times though that puts the crisis in perspective. Belgium, it says, is desperate to prevent a panic because Fortis is the country’s biggest private sector employer and handles the bank accounts and insurance policies of 1.5m Belgian households, or almost half the population.

One gets the impression that the "Europeans" have been a little complacent, if not smug, about the financial crisis, which has affected mainly the "Anglo-Saxon" systems in the US and the UK, with Sarkozy pointing a thinly disguised finger at the US.

Now that the crisis is on the doorstep of the EU commission in Brussels, however, the Euros are getting first-hand experience of it, which could have some repercussions. As the contagion spreads, we can possibly expect some more high-profile activity from the commission which, so far, seems to have been keeping its head down.

Are we to see commission officials in the streets with begging bowls or will they, as usual, be picking our pockets?