In Europe but not ruled by … 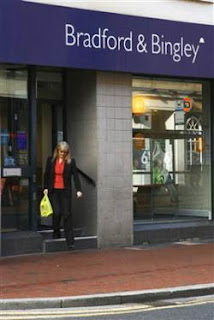 The BBC website today helpfully publishes the full text of the government statement on the nationalisation of the Bradford & Bingley bank and the sale of parts of the business to Spanish banking giant Santander.

However, one has to read well into the document before bumping into the "elephant in the room" – the invisible partner of the quadupartite regulatory system that no one seems to want to acknowledge. But, the footprints are there, with the statement reading:

It is the Government's current intention to seek state aid approval from the European Commission to extend these guarantee arrangements as part of the restructuring of Bradford & Bingley.

The current status of the deal is confirmed by Reuters which reports the EU commission saying it had been in touch with British authorities over a rescue plan, "and expected them to notify the EU executive of state aid in the course of Monday".

The agency cites Jonathan Todd, spokesman for EU competition commissioner Neelie Kroes, who states: "We've been in very close touch with the UK authorities throughout the weekend ... Our understanding is that the UK authorities will notify rescue aid to us today."

A similar process is in hand with the rescue of the Fortis Bank. The Forbes agency, relying on a Reuters feed, is reporting that EU competition commissioner Neelie Kroes have been consulted on the Fortis rescue and had been "close touch with the Belgian government all weekend."

Again Jonathan Todd is cited. He says: "We will look at any state aid involved as a matter of urgency," with the report adding: "Under EU rules, rescue aid must be limited to six months and to the minimum required to ensure the company's survival." That report concludes: "How the EU regulator handles the case will depend on whether the governments buy shares at the market price or inject new capital into the bank."

Back in the UK, a merger between Northern Rock and B&B is one of the suggestion being considered as a way of resolving this bit of the financial crisis, although the invisible elephant looms here as well, although you will have to read about it on CNN.

More of its role is articulated in local media, rather than the UK nationals, with MEP Martin Callanan saying: "I wouldn't like to see Northern Rock disadvantaged by whatever they do and never forget we are still waiting for the results of the investigation by the European Commission into state aid for Northern Rock."

He adds: "And presumably if Bradford and Bingley was rolled into Northern Rock, that would make it even more difficult to win approval. We are already facing huge job cuts in the North East and potentially this could make the situation even worse."

Northern Rock itself is already bumping up against restrictions imposed by the invisible elephant. The Times reports that more than £1 billion of savings has flooded into the bank in the past two weeks resulting from the government guarantees underpinning Northern Rock. These have been encouraging savers to move their cash.

But, we are also told, "the influx has pushed the bank close to the caps imposed by European competition laws which restrict its ability to compete with the banking industry for customer deposits." Northern Rock, the paper says, "has agreed" to hold no more than £17.6 billion in customer deposits – equivalent to 1.5 percent of all savings held in British institutions.

That is an interesting way of putting it. It is rather like me driving down a motorway with a police car following and my "agreeing" to drive at 70 mph.

Anyhow, this has not stopped the Conservatives playing their games, which have developed over the weekend.

Wannabe chancellor George Osborne has now declared that he is willing to talk "constructively" with his opposite number Alistair Darling on ways to protect banks and taxpayers. But, he says, B&B's fate was due to the "clear failure" of the regulatory system "established by Gordon Brown."

Osborne adds that the Conservatives had proposed a "much better way" of dealing with the crisis, the idea of giving the Bank of England enhanced powers to step in early and run troubled banks while trying to negotiate a private sale of assets.

If he wasn't a bit busy, Neelie Kroes's spokesman, Jonathan Todd, might have a thing or two to say about that – in private at least. But Osborne could save him the trouble by reading up EU state aid rules, starting with this short piece.

But then, since he seems to believe we are "in Europe but not ruled by Europe," Osborne probably thinks he does not need to read anything at all.