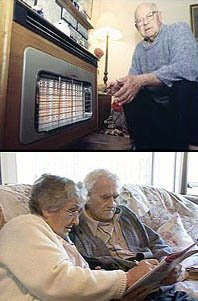 It is instructive, as one of our forum members wrote, that the first serious foray of the admirable Centre Right blog into the "energy crisis" elicited only two comments.

The more recent energy-related post on the main Conservative Home blog did somewhat better, with 34 comments, but this post did not address the energy crisis, as such. Rather, it dealt with the somewhat asinine comments of shadow energy secretary Alan Duncan on the subject of carbon capture.

Clearly, the Conservatives – or, at least, the chatterati wing of the party - have not woken up to the importance of energy policy, preferring to tell readers (amongst other things) that John Redwood's blog has changed its masthead.

Perhaps though, it should listen to its own shadow energy secretary, not on carbon capture, but on the broader issue. With Liam Fox, the shadow defence secretary, Alan Duncan recently wrote an article in a supplement to The Spectator (no link) on the need for a new energy strategy.

Significantly, this pair actually wrote, "Energy security has become the most pressing area of public policy", and indeed it has - although you would not realise this from Duncan's more public utterances (or lack of them). Nevertheless, we would agree wholeheartedly with his view. That we do is reflected in the emphasis given to the subject on this blog. And, although it has escaped the notice of the increasingly vapid media, that too has become the Republican’s keynote issue in the presidential election campaign.

The lack of sensible input from the Conservatives thus does represent a serious failing of a party that seems more concerned with its rebranding and its social agenda, failing to understand that, of all the issues which worry the "hard working families" about which Mr Cameron professes so much concern, the costs of petrol and their energy bills – gas and electricity – are absolutely dominant.

Another aspect of that same failure is the apparent willingness of the party to leave the debate on "fuel poverty" arising from high energy prices to the dysfunctional and increasingly aggressive gaggle of Labour back-benchers and the economically illiterate delegates at the TUC conference, now in full flow – all variously demanding a windfall tax on the energy companies.

Although prime minister Gordon Brown is to deliver details of his alleviation package on Thursday, hard left organs such as The Star are still demanding that the government should, "Tax these obscene energy profits".

Chancellor Darling, this paper says, "should go after their vast sums which they say they need to build new generating equipment." Why, it says, don't they borrow the money to invest like every other business? Why should "ripped off" consumers foot the bill now before these power stations are even off the drawing board?

We could answer that at length, but we will not. Suffice to say that the net margins of the energy utilities are by no means excessive and that, in order to attract the investment to build new power stations, those same companies have to deliver yields on investments which would attract potential investors. Imposing a windfall tax would send a signal to investors that the industry is still the plaything of governments, with profits subject to retrospective taxes on a populist whim.

More to the point, although sundry politicians may complain about the spiralling costs of energy – as do we all – the very fact that prices are highly volatile, and rising (despite a temporary fall in the price of oil) means that bulk buyers must keep a high level of liquidity in order to finance future inventories.

The nature of this volatility was well-illustrated today when The Daily Telegraph (online edition) reported that Britain was being "outbid for gas on the global market."

This message had been delivered at an Ofgem conference in London, with the news that the UK will have a low supply of stored gas this winter because countries in Asia and Spain are outbidding us.

Although the UK is building more storage facilities for liquid natural gas (LNG) because its supply of gas from the North Sea is declining, it is not able to use even the existing capacity because supplies are currently extremely tight and such that is available is being bought up by our competitors at inflated prices.

In fact, while The Telegraph has got onto this in its own belated fashion, this was flagged up by Bloomberg in August and we raised it in a piece of our own the same day.

What this points up is that, as a direct result of cumulative failures in managing our energy policy, the UK has become unhealthily reliant on gas for its energy supplies. This is, in political terms, an open goal for the Conservative Party, except that its key decision-makers have chosen to go back to the pavilion and talk amongst themselves.

As we and any number of experts continue to warn, however, this is not a static situation. All the indications are that it will get worse, unless dramatic steps are taken. And, in the nature of the beast, any decisions taken now have a long lag time, with many years passing before we see any results.

This is why the silence of the Conservatives is important. With many policy issues, its input can wait until it gets into office after the next electorally mandated reshuffle general election – if that happens. But with energy, the providers need to make decisions which will have a long-term effect, which they need to make as soon as possible to mitigate some of the adverse effects of the years of delay and mismanagement we have already suffered.

Clear policy direction by the Conservatives, even while still in opposition, would give a signal to the energy companies about which way they should spend their money. It would also give them confidence that, under the next administration, they will be presented with the stable and predictable regulatory environment needed to commit the massive investment which is so urgently required.

Continued silence on energy policy from the Conservatives, therefore, is not a sensible or a responsible option. There is a time for leadership and that time is now. Mr Cameron should listen to his shadow energy secretary and Mr Duncan should listen to himself. And they should put his words into action.