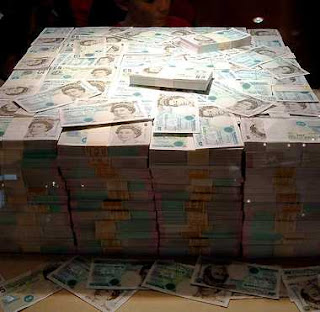 The Lehman crash opens wide a vein of which we had begun to explore with our examination of carbon capture. It may be obvious when you think about it, and start doing some digging, but it has not been to forefront of the debate – the simple precept that one of the main beneficiaries of "climate change" is big business.

To that extent, simply to position the climate change issue as greenie propaganda is to miss the point. Green politics itself is a money-spinner, which makes the green agenda advocates beneficiaries in their own right. Big government, and especially the tranzis like the European Union and the United Nations gain considerably, as indeed do national governments which are able to expand their tax bases with rafts of green taxes.

Now put big business into the mix and you have a potent cocktail – a triumvirate of vested interest which needs to stoke up public concern about "climate change" in order to reap the financial and political rewards. The big myth in all this, of course, is that the "greenies" and industry are on opposing sides. They are in fact allies (some unwittingly), each standing to benefit in their own ways, alongside their allies in the various levels of government.

Arguably, this is – if one dare use that term – a vast conspiracy of interest, a means by which this triumvirate has found the golden key which enables it to pick the pockets of ordinary people. That turnkey, of course, is the quest to "save the planet", for which no impost or sacrifice is too great to demand.

Focusing on the big business dimension, the benefits of "climate change" are stunningly obvious – but only when you put the pieces together in what emerges as a classic "baptist and bootlegger alliance".

At the heart of the scam is, in European terms, the European emissions trading scheme (ETS). Elsewhere, in the USA and Australia, for instance, it is "cap and trade". What this does is put a notional value on an otherwise valueless waste produce, carbon dioxide – legitimised by the extraordinary sleight of hand which has turned this harmless chemical into a threat to our very existence.

It is in the electricity generation industry, however, that the nature of the scam is most easily seen. This industry is a particularly valuable target for two reasons. Firstly, unlike most manufacturing industries, it cannot move offshore if costs are loaded onto it. Secondly, it has a very large and captive consumer base which needs the product and cannot easily find a substitute.

Now, the way the scam works is as follows. Through the ETS/cap and trade scheme, a "tax" is applied to the industry, in the form of a government-mandated price increase based on the tonnage of carbon dioxide produced. That is the genius of this "tax" - disguised as a price increase, it can be passed straight down to the consumer.

At first sight, any requirement for carbon capture is a huge impost on industry but it is quite the reverse, as long as the customers' bank accounts can be raided to pay for the costs. Rather than pay the money over to government – which is the plan under phase II and III of ETS (the latter starting in 2013) and the intent of cap and trade – the industry can instead "invest" it in the capital plant required for carbon capture.

Not only does this have tax benefits (maximising capital allowance), it increases the asset value of the generators, which goes straight on the balance sheet. Further, with increased operating costs, constant margins – at the levels permitted by the regulators – actually yield considerably more cash in absolute terms.

Putting figures on this, the wholesale value of electricity generated in the UK (2007 data) is approximately £32 billion at current prices. Assuming that remains static and, in phase II of ETS, carbon fetches about £35 per metric ton (one of the lower estimates) that adds £7-8 billion a year to the cost of electricity production. Siphoned off into asset building (carbon capture plant), that finances an increase in the asset base of something like £80 billion. In other words, this particular response to "climate change" adds that amount of value to the industry.

Nor indeed does it stop there. The other side of the equation is the drive towards renewables, which we have estimated will add another £6 billion to electricity prices through the ROC. The industry's turnover thus increases by about £14 billion, a cool 42 percent in one hit.

That is where the attraction lies. In a mature industry like electricity generation, with near 100 percent penetration, opportunities for growth are extremely limited, especially when the drive is towards increasing energy efficiency. The opportunity to increase turnover by 42 percent or thereabouts is a massive business opportunity which no industry could afford to turn away.

All this, of course, relies on keeping the population in a state of fear, convinced that "climate change" is a real and serious threat. Small wonder, therefore, when you look behind the climate change propaganda, the energy companies rather than the greenies are the major pushers.

That is the way it will stay until the bulk of the population wakes up to the realisation that "climate change" is one huge scam calculated to raid their wallets and enrich the owners and shareholders of their electricity providers.