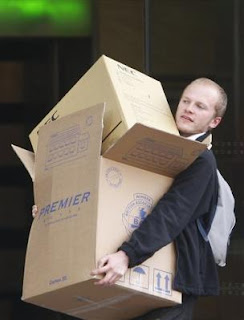 Nobody seems to know what they are doing, says a warbling voice on the radio. I looked up this and smiled wryly. Time to batten down the hatches.

The good news is that Lehman Brothers were heavily into climate change, lauding the business opportunities which were opening up.

Interestingly, their report on "The Business of Climate Change" – linked above – is cited on its web site (we wonder how long that will stay up) as an example of their "intellectual capital". Lehman Brothers, the site proclaims, "prides itself on being a thought leader".

This is a company which has used James Hansen as its advisor, so we are told, the self-same company having ambitions of becoming "the primary brokerage for emission permits".

Somehow, it is entirely fitting that a company which was looking to exploit the smoke and mirrors business of carbon trading should crash and burn.

And, where Lehman Brothers go, surely al Gore cannot be far behind. Gore is (was?) a great pal of Theodore Roosevelt IV, Managing Director at Lehman Brothers, sharing common interests as fellow members of the board of the Alliance for Climate Protection.

In our post yesterday, on carbon capture, we wrote, "there is money in that there carbon". What begins to emerge is the extent to which the greenie agenda has been hijacked by big business, who see in the raft of climate change controls huge money-making opportunities.

With Lehmans in the forefront of this hijack operation, we wonder whether - like the dotcom fluff - another bubble about to burst.