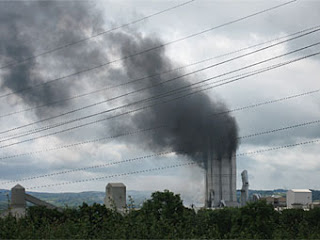 Although the European emissions trading scheme (ETS) is set to cost electricity generators (and thus us, the customers) £2 billion over the next four years - as permits go up for auction - other major industrial companies are set to make hundreds of millions out of the EU's "generosity".

This is according to The Guardian, which is reporting that many companies have been over-allocated with emission permits, equivalent to nine million tons of carbon dioxide – all of which can be sold for cash.

Some 200 companies are beneficiaries covering all sectors, from steel and cement making, to car manufacturing and the food and drink industry. Says The Guardian, dozens of household names such as Ford, Thames Water, Astra Zeneca, Heathrow Airport, Toyota and Vauxhall are among the companies that could benefit.

One of the largest beneficiaries is Castle Cement, which makes a quarter of all British cement at three works in Lancashire, north Wales (pictured) and Rutland. While total CO2 emissions from the three plants have fallen from 2.3m metric tons in 2005 to 2.1m in 2007, they have been allocated 2.9m metric ton in permits for each of the next five years - an annual surplus of 829,000 permits.

At the current price of £21 per metric ton, the company could sell its surplus permits for £83.5m over the five years.

Perversely, some enterprises have been allocated fewer permits than they require, not least the Leeds Teaching Hospitals NHS Trust. It is predicting an annual deficit of 5,800 and is thus needing to siphon over £120,000 a year from its clinical budget to buy extra permits.

And, not only is the electricity industry having to pay for its permits, it is also 70 million metric tons short on allocation, which it will have to buy on the open "carbon" market. At current prices, that is nearly £1.5 billion added to our electricity bills.

The Guardian cites Bryony Worthington, founder of the campaigning group Sandbag, who notes that this "… means electricity customers are effectively subsidising heavy industry's right to pollute, while being urged to make environmental sacrifices in their own lives."

And that is they way things now work in this country – courtesy of our new masters in Brussels. But, from an organisation that brought us the Common Fisheries Policy, did we ever expect anything else?