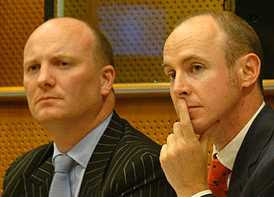 He took an amount of flak from a gaggle of Irish journalists and europhiac MEPs who had evidently conspired beforehand to give the man a hard time but, apparently, brushed off the hostility with ease. The Irish Times thus struggled to make a big deal of the meeting.

What is more interesting is the number of side meetings which Ganley conducted while he was in Brussels, where he is also opening an office to co-ordinate his response to the euro-elections. One such was a long lunch with Farage and colleagues, the latest of several meetings with UKIP MEPs, at which former MEP Jens Peter Bonde has been present.

At the top of the agenda has been Ganley’s plan to field up to 400 candidates at the euros, with UKIP wishing to convince the leader of the Irish think-tank Libertas not to stand against UKIP contenders.

However, Ganley is also being assiduously courted by the Tories, with whom he has a greater philosophical affinity – being broadly in favour of the European Union and imbued with the same fantasy that, if only the organisation could be "reformed", everything in the garden would be rosy.

Whether Ganley stands for office (if you can call it that) is very much in the balance. He told the SOS Democracy meeting that he was reluctant to run as a candidate "because he doesn't feel like a natural politician". And he is also – apparently – undecided on whether to launch Libertas as a political party to fight in the elections. He does not anticipate making a final decision before January 2009, which is leaving it rather late if he wants to get a multi-national election team up and running.

That leaves it open as to whether Ganley is to take on the role of kingmaker or pretender. In the latter, he would be up against the combined weight of all the existing eurosceptic and "euro-hesitant" parties, fighting for his share of the vote and open to the criticism that he was splitting the vote and weakening the established parties.

In the alternative role as "king maker", the endorsement of Ganley – widely seen as the architect of the Irish referendum victory – could be a powerful boost to those who gain his favours.

Despite UKIP's advances, Ganley seems more likely to favour the Tories. As Dan Hannan points out in his blog, Declan is "an insistent pro-European" and has little in common with the party. He also tends to the view – somewhat reinforced by Jens Peter – that UKIP is a busted flush.

Interestingly, this was almost precisely the view expressed recently on the other side of the divide, by no less than Alexander Stubb Finland's foreign minister. Interviewed by the Irish Times he professed himself to be "unconcerned" by the prospect of Ganley fielding candidates, seeing parallels with UKIP. "No matter how slick and brilliant Nigel Farage is, the party has become a complete footnote with no influence," he said.

Certainly, UKIP is going through yet another round of its interminable infighting, lovingly recounted by Iain Dale, which is about to leak into the regional press.

If the Tories able to put their weight behind opposition to the constiutional Lisbon treaty and are also able to attract Ganley's endorsement, the premier anti-EU party may not only find itself outflanked and marginalised at the euro-elections, but also crippled by the burden of adverse publicity.

It is probably not an exaggeration, though, to suggest that Ganley could prove a decisive factor, and it will take more than a good lunch with Farage to turn him round.