By their propaganda shall ye know them 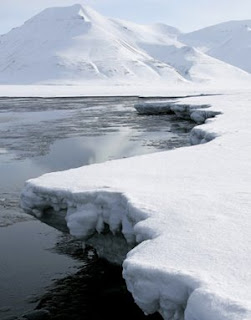 A short letter in The Daily Telegraph today, on the polar icecaps, makes more sense than the acres of guff promulgated by the warmist groupies on the paper's staff.

The letter, from John Marshall of Tetford, Lincolnshire, refers to a report in the paper a few days ago. This retailed the alarmist view from Prof Mark Serreze, a "sea ice specialist at the National Snow and Ice Data Centre (NSIDC)" that the current ice meltback images suggested the Arctic may have entered a "death spiral" caused by global warming.

Writes Marshall, "This alarmist rhetoric is unjustified. Satellite records, which are used to show ice cover, only go back 30 years: a very short time in polar history." He adds: "Roald Amundsen sailed the Northwest Passage in 1903 and saw no ice. Therefore the ice would have been the same area as today's, or less," then informing us that, "The current melting is due to a slight change in warm ocean currents, not climate change."

In one of our posts, we referred to a report in November 1922, where "fishermen, seal hunters and explorers" were finding "radical change in climatic conditions" in the August of that year. One expedition established a record by sailing as far north as 81° 29’ in ice-free water.

In other words, there is nothing at all new or particularly unusual about extreme meltbacks in the Arctic and such conditions have hitherto been entirely unrelated to global climatic changes.

That much is effectively endorsed in a piece in the invaluable Watts up with that which cross-links to a report by NASA. This recorded an "ongoing reversal in Arctic Ocean circulation triggered by atmospheric circulation changes that vary on decade-long time scales." These results, according to NASA, suggested "not all the large changes seen in Arctic climate in recent years are a result of long-term trends associated with global warming."

In the letters column today, Mr Marshall has issued a valuable corrective but, of course, it will not make one blind bit of difference to the torrent of propaganda emanating from the warmists. But, with the BBC in full flow today, by their propaganda shall ye know them.