The onset of madness 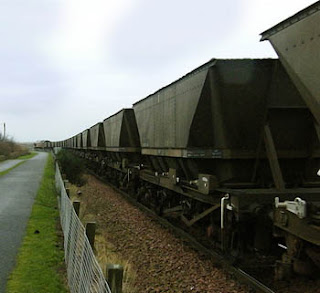 A week ago we were reporting on the twittering about carbon capture, not least the enthusiasm of shadow energy spokesman Alan Duncan.

Today's Times offers a report which allows us to revisit this madness as we learn of a plan drawn up by Scottish Power to install carbon capture at the Longannet coal-fired power station in Fife.

Two things of very great interest emerge from this report – first some useful statistics on the station. Together with other data, the power station details and cost projections on carbon credits under the EU's emission trading scheme (ETS), this enables us to do some basic calculations which indicate the massive costs involved.

The second thing of such interest is that the newspaper itself does not do these calculations itself, instead presenting the idea of carbon capture from this plant as a "massive [business] opportunity" for the power company, entirely heedless of the massive adverse consequences to us the consumers.

Taking a look at the story together with some of the various statistics, we learn that the power station produces an annual average of 10.4 TWh (10,400,000MWh), burning five million metric tons of coal in the process. The electricity, at current wholesale prices of £85/MWh, is worth about £884 million (call it £900 million for simplicity).

No price data are given for the cost of the carbon capture but Scottish Power are thinking is terms of it being profitable, the profit coming from not having to buy carbon credits under the ETS. By 2012, the cost of credits per ton of carbon dioxide produced is estimated at £35 (although it could be more or less). With Longannet using five million metric tons of coal, at 2.84 tons of CO2 per ton of coal, we are talking of a cost "saving" of £497 million (call it £500 million) - money which will still be charged to the conusmer.

Thus, Scottish Power are effectively looking at a "kitty" of half a billion a year to finance the burial of their carbon dioxide emissions under the North Sea, a process that will attract considerable costs but also yield an acceptable profit – let's say about ten percent.

On that basis, we are actually talking about a scheme that is set to cost about £450 million a year – adding half as much again as the value of the electricty produced. That is money that will be charged to the consumer which with the usual margins, etc, could mean electricity prices going up by as much as fifty percent. To that, you also have to add between 10 and 20 percent increase in coal consumption to power the carbon capture system - although that may be an under-estimate. It could add 40 percent to the coal burn, effectively doubling the price of electricity if you take the higher figure.

Accepting that these are very rough and ready figures (but we have no others to go on), this means a massive extra burden on already hard-pressed electricity customers, all for the privilege of seeing minuscule quantities of carbon dioxide (on a global scale) buried under the sea, with no measurable impact on global warming – even if you believed there was a link. The cruel joke is that, even without the carbon capture, the money would still have to be paid by the consumer, although it would go to the government instead of the energy companies.

That this is being proposed and without any hint of adverse comment by the newspaper which reports it is utterly bizarre. We are witnessing here the onset of madness - but we are also seeing an illustration of why power companies are amongst the leading cheer leaders for climate change controls. There is money in that there carbon.