Please, don't let this be true 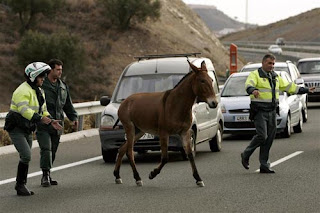 Oh the vicissitudes of writing about the European Union and actually understanding most of it (nobody understands all of it, not even Jacques Delors).

My colleague and I spend a good deal of every day clutching our respective heads and wondering why we bother. That is when we do not "celebrate" anniversaries: ten years since my first briefing on the Meat Hygiene Service (my colleague got on to that long before me); so many years since the first position paper for the Countryside Alliance on FMD; and ten years since I first wrote about the British art market and the likely effects of EU legislation on it.

In April I put up a posting because the Financial Times in its infinite wisdom published an article that "sounded the alarm" about the full version of the droit de suite legislation. The posting explains what the fuss is all about.

Actually, more to the point, where have I written this before? Well, apart from articles in the European Journal and eurofacts in the past (first time in 1998), as well as several briefing papers for friendly peers, I wrote about it on EU Referendum on February 15, 2005, December 20, 2005, December 22, 2005, January 25, 2006. On the One London blog I wrote only twice, in connection with the fatuous report produced by Angie Bray, that stalwart member of the Conservative Party, on December 21, 2005 and on February 1, 2006, the latter showing some choice examples of fatuousness both on the part of Ms Bray and of Hizonner the Mayor.

Earlier today I received a press release from the European Foundation, whose European Journal clearly has no archives.

The press release tells me that in the next issue of the European Journal, shadow minister for science and innovation (the jobs these people have!), Adam Afriyie, will ask "if a new EU Directive will damage Britain's £8.5 billion art market". Please don't let this be true, I said. Please, just for once, could we have evidence of intelligence and knowledge on the part of a Conservative politician and a Conservative Eurosceptic outlet, to wit the European Journal?

It seems my pleas to whatever powers there might be is about as effective as the little boy's to the famous baseball player "Shoeless Joe" Jackson. Allegedly, when he came out of the courthouse after admitting to being part of a fix, the boy said to him: "Say it ain't so, Joe". The story may or may not be true but "say it ain't so" has become a well-known phrase. Of course, the point is that the reply would have been: "sure it is, kid".

That is presumably all I can expect from the Conservative Shadow Minister and the European Journal:

"Sure it is. We have just discovered Directive 2001/84/EC and we are going to be shocked and horrified by what it might do to a successful business in the country, now that we cannot do anything about it.

Of course, we never could do anything about it, as this is a Single Market legislation and is, therefore subject to qualified majority voting procedure but we are not too clear what that means in real terms, so let's just forget about that.

Naturally, we assume that everybody else is just as stupid and ignorant as we are and will not notice that we are wasting our time and stretching everybody else's credulity trying to acquire some eurosceptic kudos."