The ignorance of the Irish 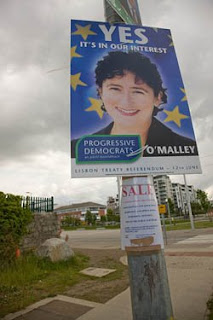 Under normal circumstances, our lead story this morning would have been the release of the Irish government's research on voting behaviour during the constitutional Lisbon treaty referendum. That we get to it late, though, does not diminish our view of its importance.

Covered extensively in The Irish Times and to a lesser extent elsewhere, the research concludes that 42 percent of people cited a lack of knowledge, information or understanding of the treaty as the reason for voting "no". It was, we are told, by far the most significant reason given for voting against the treaty.

In that the first two issues cited (conscription and abortion) related largely to matters of fact, one can see the value of the findings to the Irish government. But, when it comes to the other matters, these are very much expressions of opinion – and highly tendentious at that.

Arguably – and very strongly so – that the treaty "strengthens the role of national parliaments" is simply not true. It seriously diminishes their powers. As for, "improving [the] efficiency of EU decision-making", what is meant by that? One man's "efficiency" is another's loss of democracy.

Thus, on the basis of the government's own research, one could argue that, if anything, the "yes" voters were less well-informed than the "no" camp, only about different things. Either way, therefore, the research does not actually take the dispute about the treaty any further.

Nevertheless, the report sparks a strong leader in The Irish Times, some of it with which we would agree. Heading its piece, "An indictment of democracy", the paper opines:

Voters have a poor objective knowledge of how the EU works, especially on the No side. This extends well beyond the Lisbon framework to encompass basic understanding of its purposes, membership and functioning. This is a lamentable state of affairs in a modern democracy which shares so many decisions with other states. It is an indictment not only of the Irish referendum campaign, but of the EU, its leadership and its institutions at large. When compounded by a definite loss of trust in leaders and parties in Ireland, it amounts to a dangerous loss of legitimacy for our political system. This survey finds 50 percent of voters do not feel close to any of the political parties. It was not surprising then that those who normally vote for one or other of them failed to follow their advice on the treaty.

Our dispute here would be in the suggestion that "yes" voters had any better understanding of the purposes, membership and functioning of the EU. Our suspicion is that, should detailed questions on these matters be put both sides, there would be very little to chose between the results. How many, for instance, could confidently assert that they knew anything of the vital role of "comitology" within the EU?

Howsoever, the results of the research have given the Irish government food for thought and we are now effectively getting confirmation that there will be no second referendum before the next euro-elections.

This comes via Jean-Guy Giraud, the former director of the EU parliament’s office in Paris, now special adviser in charge of following ratification of the constitutional Lisbon Treaty. He offers a solution to the impasse of a sort, but also notes that the delay in ratification "could have a negative effect on European public opinion, strengthening the Eurosceptic vote in the June 2009 parliamentary elections."

This is possibly not the only factor. In the Irish Times today, we also get news that the ECJ has ruled against Ireland in a case concerning a failure to comply with the Urban Waste Water Directive in six areas.

Phil Hogan, Fine Gael's spokesman on environment, heritage and local government, now complains that the Irish taxpayer is "at risk of millions of euros of fines …", even if he puts this down to "to Government inaction."

Not all will be taking the same view, some preferring to look to their tormentors in Brussels, where the "colleagues" are so keen better to communicate their policies.