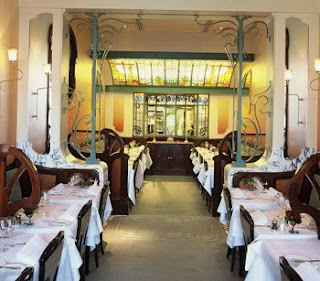 No messing – no irony: this is truly good journalism, a job that only the media can do. The Sunday Times has run a "sting" operation on a corrupt EU official in Brussels. The story opens as follows:

Wenig discussed the possibility of payment or taking a lucrative job with the businessman. He said he would decide further once he had provided "results".

He leaked the names of two Chinese companies likely to get special status if the EU imposes a protective tariff barrier against Chinese candle-makers. The information is potentially worth millions to those trading with these companies.

This was over dinner in the elegant Comme Chez Soi (pictured), one of the great Brussels restaurants. The paper has a more detailed report here, which is well worth reading.

The information revealed (for once the word is merited) is seriously damaging to the EU commission and, as the paper says, raises "questions about the standards of probity in Brussels, where civil servants formulate policy affecting trade worth billions with the world’s main trading blocs."

A spokesman for Mandelson, the trade commissioner, has said he would launch a "comprehensive and thorough" investigation. But don't hold your breath. The most likely outcome is a whitewash, with no action taken. This is, after all, the EU we are dealing with.