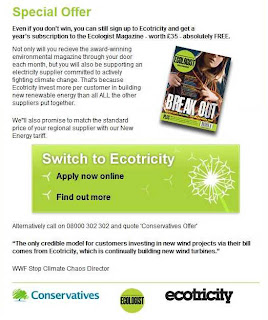 Not only is Ecotricity offering a prize to Conservative Party members of £400-worth of free electricity to the lucky winner of its competition, all entrants get a free year's subscription of the loss-making Ecologist magazine - as long as they sign up to Ecotricity (click pic to enlarge).

The Ecotricity site claims this is worth £35 – although a subscription is advertised on the Ecologist site at £28.

However, even at £35, Ecotricity, can well afford it. The company claims to be operating 92 wind turbines with an installed capacity of 135 MW. Allowing for a 25 percent overall load factor, that means it will deliver in the order of 385,440MWh this year, giving Vince Dale, the multi-millionaire owner of the company, a cool £17 million in ROC subsidies to play with, on top of the revenue from the electricity sales.

With the Ecologist actively promoting his company, Dale will be purring at the thought of Conservative Party members being given the opportunity to read this greenie tome. On the other hand. Zac Goldsmith, who personally underwrites the cumulative losses of the magazine, will no doubt be grateful for the hidden subsidy.

Possibly, the largesse on offer from Dale – who is often seen alongside Zac on the campaign trail, with both having links with Greenpeace – will help Zac offset his £72,583 donation of "office services" to the Richmond Park Conservative Association, and his £27,000-worth of "auction prizes" donated to Conservative Central Office, rumoured to be helping finance David Cameron's private office.

We wonder, though, if Dale's gift to Zac will be declared to the Electoral Commission as a political donation.