Too little, too late 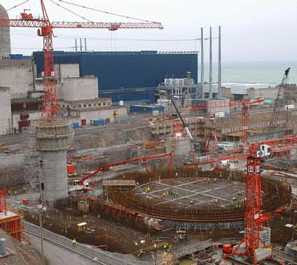 The purchase by EDF – 85 percent owned by the French state – of the assets of British Energy for the sum of £12.5 billion is, on the face of it, both worrying and reassuring.

On the one hand, it puts a sizeable proportion of the British nuclear industry in the hands of a foreign – and some would say hostile – power. On the other, it is the only sure means of kick-starting our nuclear programme and replacing some of our ageing nuclear reactors.

EDF is saying that it will now commit to building four new reactors on two sites, Sizewell in Suffolk and Hinkley Point in Somerset.

The model will be the 1650 MW European Pressurised Reactor (EPR), the first of which type is already under construction in Flamanville on the Cherbourg peninsular (pictured), at a cost of about £1.4 billion.

At a cost roughly of £1 million per MW deliverable capacity (assuming a load factor of 90 percent) this compares favourably with the cost of wind which comes out at roughly £4 million for onshore sites and double that or more for offshore. As such, the investment in nuclear represent good value for the customer, wind only surviving with a massive subsidy.

These new power stations alone will nearly compensate (on paper) for the loss of six nuclear plants which are due to go out of service in the next ten years, the former expected to produce 6.6 GW as against the nearly 7 GW capacity of the six, although since some of the old stations are producing at relatively low load factors, EDF's contribution is set to add real capacity to the network.

On top of that, there stands EDF's proposal to hand back two of the British Energy sites to the government which will be packaged with other non-operational nuclear sites, for auction to other bidders. By this means, the hope is that we will gain another nuclear player which will add still further capacity.

The downside of this is that the first of the EDF plants will not be commissioned until 2017 – if all goes well – and will not deliver power to the network until 2020. The second player can hardly expected to bring capacity online any earlier, which means we are looking at a sizeable gap in capacity, expected to kick in from 2012 or even earlier.

How big that gap will be will depend on the fate of any replacement programme for the six coal-fired stations which are shortly to be knocked out by the EU's Large Combustion Plants directive, these accounting for a further 8.5 MW loss.

Only one new coal-fired station is currently scheduled to replace the loss, at the controversial Kingsnorth site, but the fate of this remains in the balance by the intervention today of Lord Smith, chairman of the Environment Agency.

Smith is saying that construction of coal-fired power stations should be banned until or unless they can be equipped with carbon capture and storage (CCS). Currently an unproven technology, this will double (or more) construction and electricity generating costs and add considerably to the coal burn. With CCS, the feasibility of continued coal-fired generation is very much in doubt.

This, of course, leaves the prohibitively expensive wind programme - the unreliability of which means that it cannot even begin to fill the energy gap – and the "dash for gas", with generators commissioning CCGT (Combined Cycle Gas Turbine) plants such as the new 1650 MW power station at Staythorpe near Newark.

At about £4-500,000 per MW of deliverable capacity, these are considerably cheaper to build than nuclear plants – and massively cheaper than wind. They are thus an attractive "quick fix" for generators wishing to get new capacity online. However, the cost of gas and the uncertainty of future supply makes them a poor bet for the consumer, who will be faced with spiralling costs and the risks of outages if supplies become unavailable.

Even then, the CCGT programme is unlikely to make up for the expected shortfall and since, at this time, the only known nuclear programme will deliver just slightly more power than the stations scheduled for closure – and then only some years after they have ceased generating, it is difficult to see how the network is going to deliver the UK's electricity needs over the next ten years or more.

Now that is something we could have a "mature debate" about.