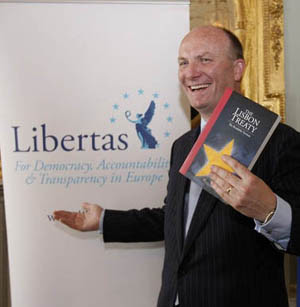 The Irish Times is not the best of sources but it is the best we have to keep us up to date with the increasingly murky tale of Declan Ganley's plan to take over the world start a political party.

Now, like a virgin tantalisingly shedding her veils with six still to go, Declan has given us a brief glimpse of his next move, recruiting – according to the Irish Times - "two of Europe's most prominent Eurosceptics to help him if he decides to run in next year's European elections."

You have to forgive this newspaper for not knowing the difference but one of these "eurosceptics" is former veteran Danish MEP Jens-Peter Bonde who is not and never has been of the disposition, preferring instead to milk work within the system, arguing about the points of detail but never actually wanting to bring the EU down.

Not so the other recruit, Czech president Václav Klaus, although this man already has a day job and it is difficult to see what help he can be to Declan other than to lend his name to his enterprise.

But, with these two on board (although Jens Peter has never been far from Declan's side), the master plan comes a little clearer in that a launch of Libertas as a pan-EU political party seems to be in the offing – running on the platform of opposition to the constitutional Lisbon treaty.

However, our Declan has repeated his assertion that he is a "pro-European" (we think he means pro-EU) and that his opposition is simply confined to the new treaty. He notes that this is "the first time Brussels is being challenged by enthusiastic Europeans".

In pursuit of his broader aim, whatever that might be, Declan is planning to speak to the Movement for France (MPF) in Paris today, his overt intention being to strengthening his "European links". This party also passes itself off as "eurosceptic" but, like Declan, does not want to secede from the European Union.

Sooner or later Declan will come clean on his precise intentions, which are of some interest to us in lil 'ol England, as to whether he is going to ally himself with UKIP or the Tories. Alternatively, he could bid for seats under the Libertas brand – with or without Farage - thus confusing the electorate and potentially splitting the eurosceptic vote (even more).

Here, the apparent tryst with Václav Klaus is interesting. His Civic Democratic Party has been assiduously courted by the Tories in the hope that they will join a new EU parliament grouping when or if the Tories can finally muster the courage to honour Cameron's promise and quit the EPP.

If Declan is also courting the MPF – which currently has three MEPs in the EU parliament and was also a prospective member of Dave's new EU parliament group – this could cause problems. If Declan's intention is to create an all-new pan-European party and manages to Hoover up the CDP and the MPF, the Tories could end up out on their own if they leave the EPP.

We have, therefore, what seems to be a wild card in the pack, potentially changing the dynamics of next euro-elections in an entirely unpredictable way. The thot, as they say, definitely plickens.