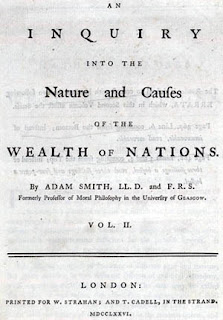 It was the great economist and philosopher Adam Smith who wrote:

People of the same trade seldom meet together, even for merriment and diversion, but the conversation ends in a conspiracy against the public, or in some contrivance to raise prices.

Now, they do not even bother to hide their intentions – they just cite "climate change" and lobby the government so that they can "compete for the lucrative business" made possible by its measures.

Such is clearly the motivation of the Corporate Leaders Group on Climate Change which, under the aegis of the Prince of Wales's "Business and the Environment Programme", have written a letter to the prime minister and the leaders of the opposition parties calling for "the cross-party effort that is essential to deliver a low climate risk economy."

What, in effect, they are asking for is a suspension of the political (i.e., democratic) process, their stated aim being to encourage "a new cross-party political consensus" on the scale and speed of change required, and a constructive political debate on how their "lucrative business" can be delivered.

Most of these, in one way or another, stand to gain financially from implementation of climate change measures, some more directly than others. The energy companies Shell, Centrica and E.on in particular stand to make money from the ETS and the allied emission mitigation measures.

Companies like Faber Maunsell, a "multi-disciplinary, award-winning consultancy specialising in the planning, design and engineering of buildings, transport systems and environmental services", also stand to make a packet out of climate change mitigation contracts. And Johnson Matthey, which just happens to produce components for fuel cells, is nicely placed to grab some of the "lucrative business".

The multi-billion international investment company, F&C Management is also a very interesting example of self-interest in action. It has actively lobbied the US congress for "cap and trade" and is keen to follow in the footsteps of al Gore and make a tidy fortune out of carbon trading.

The same "lucrative business" opportunity awaits Lloyds TSB and the Standard Chartered Bank, the latter gleefully talking up the prospects for the carbon trading market.

The Anglian Water Group is heavily involved in renewable energy, as indeed is Thames Water, which is already the largest generator of renewable energy within the M25 and is very keen on developing electricity generation from sewage sludge.

B&Q stands to gain considerably from increased retail sales of insulating materials and energy saving devices, as do – to a certain extent – Tesco and John Lewis.

For these two latter companies, their involvement also – in their own eyes – confers a PR bonus. Being seen to be "environmentally conscious" is good for business. That probably explains the presence of BAA - anxious to demonstrate its corporate responsibility - the involvement of Vodafone (although the latter sees product development opportunities as well) and of the Reckitt Benckiser Group.

PR is certainly one of the motivations of Sun Micro-systems. However, Vinod Khosla, co-founder of the company is pumping millions into developing biofuels using "synthetic biology". Unilever is also heavily into biofuels and is actively promoting second generation biofuel.

Thus, although this initiative is presented as business expressing "concern" about climate change, the letter to the prime minister is nothing more or less than a naked expression of pork-barrel politics.

Ironically, Greenpeace is accusing some of those involved of "hypocrisy of a previously unknown magnitude". In so doing, however, it misses the point. As we pointed out earlier, the greenie agenda has been hijacked by big business, who see in the raft of climate change controls huge money-making potential.

The letter to prime minister is just another example of that dynamic, where the players have recognised the scam for what it is, an opportunity to plunder the private purse.

Adam Smith must be turning in his grave.