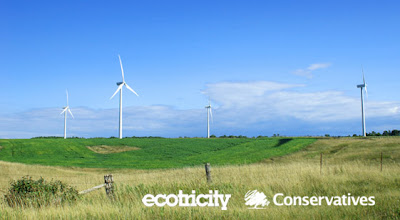 This blog is characterised as "right wing" and it is fair to say that our natural sympathies are with the Conservative Party. But, as readers will have gathered from our many posts, our support for the Party is conditional. We regard ourselves as "candid friends", critical when we feel the need, especially when we think that the Party is departing from its principles or taking a wrong direction.

And it is doing precisely that.

Sent to us is an illustration of an appallingly inept move by the Party, allying itself with the major progenitor of wind power, the company Ecotricity, which has teamed up with the Party to run a competition "where one lucky Conservative Friend or Member will win a year's worth of free electricity".

This is a specific alliance with the Conservative Party, which extends an already dubious affinities programme, clearly implying an endorsement of the company.

On the one hand, therefore, you have Conservative MPs fighting tooth and nail against onshore wind farms and, on the other, you have the Conservative Party getting into bed with a wind farm developer that likes to project itself as one of the leading players in wind energy. It happily proclaims itself a "partner", enjoying joint logos on promotional material, while Ecotricity is allowed to use the Conservative logo on its site.

We are far from being alone in our concern. Just one of many anguished e-mails sent by members to the Conservative Party reads as follows:

Quite how you can endorse a company like Ecotricity is infuriating. Ecotricity is in the business of installing wind turbines to make MASSIVE profits, mostly coming from the huge hidden subsidy we all pay for in our electricity bills while blighting the areas where they build the turbines. Have a look at the Save our Silton website – although it is Dorset the 6 proposed Ecotricity wind turbines will blight the landscape in our local area, including parts of Wiltshire and the Cranborne Chase & West Wiltshire Downs AONB and adversely affect the local tourism industry.

Did you look into Ecotricity at all or did they just offer you that nice little carrot of free electricity for a year and you jumped at it without thinking. It is a disgrace and you should disassociate yourself from this company immediately.

With energy policy being a key issue and wind energy a highly contentious component, the Party is totally compromised by its association with Ecotricity. At the very least, this is exceedingly poor judgement. But, with Goldsmith's behaviour on the Kingsnorth affair, one fears that it could be worse than that.

However, whatever the motivation, this association is unacceptable. The Conservative Party is a political party, not a green advocacy group and it should behave like one. It would do well to heed the advice of its own members and disassociate itself from Ecotricty.