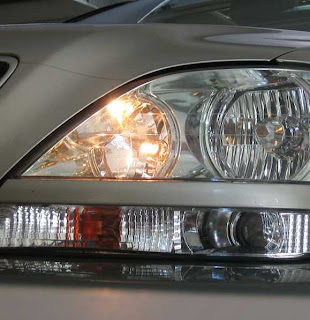 Daytime Running Lights are back on the agenda. No one particularly wants them. The British government was opposed to them, the cyclist and motorcycle groups are emphatically against them. Furthermore, the safety benefits are equivocal. Until LED lights are perfected, they will increase fuel consumption and they will add cost and complexity to vehicle construction.

But never mind all that, in a bland statement yesterday, we were told that, "the European Commission has decided to introduce dedicated Daytime Running Light (DRL) on all new types of motor vehicles from the year 2011 onwards."

So that's it, then. The European Commission has decided, so we're going to have them.

Actually, although the announcement was yesterday, it was a done deal in November 2007. Then, as we are now informed, the Commission delivered a positive vote in the World Forum for the Harmonization of Vehicle Regulations of the United Nations Economic Commission for Europe (UN/ECE) regarding DRL.

This is reflected in the draft directive and the Commission has declared that, "In order to avoid divergent vehicle requirements, which would be detrimental to the needs of European citizens and the European industry, today's decision is technically a proposal to align Directive 76/756/EEC with UN/ECE Regulation No 48."

We dealt with this, and the involvement of that shadowy body, UNECE, in a previous post and again a few weeks later.

Essentially, technical regulations are being made out of sight with no audit trail and no democratic accountability whatsoever. And when they emerge into the daylight, they come – as in this case – "as a proposal to align Directive 76/756/EEC with UN/ECE Regulation No 48". We cannot refuse to accept this as the deal was made those many months ago and we cannot possibly have "divergent vehicle requirements".

What is particularly disturbing, however, is that UNECE is technically an intergovernmental body, at which its member states (including the UK) are represented, each of whom have a vote. But here, it seems, the "Community" cast a – or even the – vote. Since when has the EU been represented on UN bodies and been able to cast votes?

As of now, The Daily Mail is hyperventilating about the proposal. "Drivers face paying up to £160 a year more for fuel," it screams, and all, "because of an EU directive forcing them to keep their headlamps on all day.".

As always, it misses the point completely. The proposal concerns specially fitted lights, not headlamps and, by the time the law comes into force, they will mostly be LED fittings. Energy consumption is only about ten percent of a normal light.

Conservative MP Greg Knight is saying that: "This idea was being pushed by Scandinavian countries and it's absolutely ludicrous that it should be imposed in a blanket fashion across Europe." Stephen Ladyman - a transport minister during earlier discussions and now a backbencher - said: "This directive will kill a lot of motorcyclists. They use daytime lights to make them easier to see but if cars are using them as well, motorbikes will blur into the background."

In the EU parliament, Conservative transport spokesman, Timothy Kirkhope, is objecting to the lights, also on safety grounds, and is calling independent assessment of the benefits "before any EU legislation on vehicle running lights was approved."

But all these worthy "lawmakers" are too late. They do not seem to understand that, because the agreement has been made at UNECE level, the EU is obliged to "normalise" its own laws by implementing the regulation. Their job is to rubber-stamp the agreement, move on and collect their salaries and expenses.

We expect no less of them.