As others see it 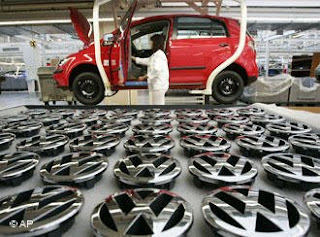 The EU commission is getting thoroughly fed up with this, the continuing saga of the so-called "VW Law" which has been dragging on since 2004.

It cropped up most recently last May when the commission was already fed up so, to say it is now "thoroughly fed up" is perhaps an understatement. However, we are not a swear blog so we cannot articulate what the commission is probably thinking – and saying – but you can bet they are doing it in 23 languages, or however many comprise the number of official EU languages these days.

Anyhow, Reuters gives the lowdown, telling us that internal market commissioner Charile McCreevy has finally lost patience with German stalling and wants to take the government to the ECJ.

As it always has been, the issue is the continuation of a law which prevents German firms being taken over by foreign enterprises, in clear breach of EU treaty obligations which require the free movement of capital across borders within the EU.

What is remarkable about this case – and also has always been – is not only that even the ostensibly communautaire Germany is prepared to buck EU law when it comes to defending what to perceives to be its own national interest, but that it has been prepared to keep up the battle so long, against all the odds.

Another remarkable factor is the way it has been so badly reported by the British media. But, when it is quite happy to paint the UK as an "awkward partner" within the EU, nothing has proved more awkward, to the point of intransigence, than the German government on this issue. Highlighting this fact might put British sentiment in context.

One final grotesque anomaly in this case is the reaction of the German trades unions – grotesque, that is to many in the UK who regard the EU as a totalitarian organisation little different from the USSR or even Hitler's Nazis.

The EU is "neo-liberal"? Whatever next?