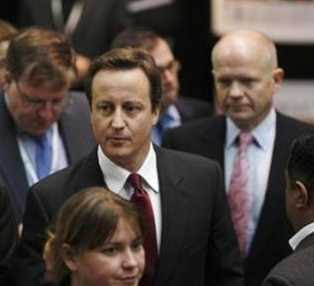 While the fall-out from the financial crisis continued to rip through global banking system, the elephant made cameo appearances on the stage at the Conservative Party conference today, led by its keeper, David Cameron.

Blinking at its unaccustomed exposure to the light, in its first appearance it was still shrouded in its veils. Then, briefly, it was exposed in all its glory – but so fleetingly that few if any in the hall noticed it.

That first appearance needed a highly sophisticated sensor to penetrate the veils, as Cameron in an unscheduled speech referred to the need to "pass legislation to enable the Bank of England to rescue failing banks." That legislation, he said, is ready, it can be brought before Parliament on Monday and we will support it.

He was, of course, referring to the Banking Reform Bill, over which shadow chancellor George Osborne and the government have locked horns.

Little Georgie on the one hand, has consistently argued for a greater involvement of the Bank of England, even up to yesterday, when he told the conference that, "It's Conservatives who now want to give power to the Bank of England to call time on reckless borrowing."

Then, deftly chopping off the legs of his shadow chancellor, Cameron declared, "In the end what matters is getting the legislation through quickly and so I can announce today that we are prepared to drop that objection to allow rapid and safe passage of the Bill - and we can return to this issue later."

In so doing, he recognised the primacy of the so-called "tripartite system" of regulation, the EU's preferred structure and conceded that he was abandoning attempts to change it.

Moving on, the Conservative leader spoke of the need to "pass further legislation to protect people's savings and deposits and ensure quick payout," and thence to breaking "the self-fulfilling cycle that is reducing banks' ability to lend." Thus, he said, as the elephant cast its veils to stand in full view unadorned, "So our regulatory authorities, together with the European regulators, need to address this difficult issue."

Cutting through the posturing of the weekend, he has finally doffed his cap to reality, hinting though not baldly stating that the power lies elsewhere. His terse, single sentence was just that – an admission that the UK cannot act unilaterally and must "address" issues "with the European regulators."

In so doing, Cameron and his merry men – if they ever get to take office – are going to find plenty of competition. Already, the "colleagues" are waking up to the opportunities afforded by another "beneficial crisis" and are muttering about additional regulation - at an EU level of course – to deal with "troubled banks".

EU financial services commissioner Charlie McCreevy is happily chirping away – most recently in an interview yesterday with RTE Radio in Dublin – that: "We have been for a long number of years trying to get some kind of European supervisory authority for those institutions that have cross-border reach," adding that, "It is particularly difficult to get agreement among member states who want to preserve control of supervision within their own member states."

The "plan" is inevitably couched in terms of "cross-border" institutions but, as the financial services industry becomes more diffuse in its ownership, that virtually encompasses every major bank in Europe. The fact that the Spanish bank Santander has bought UK banks including, Abbey National, Bradford & Bingley and Alliance & Leicester Plc, is but a case in point.

The ECB is also flexing its muscles, with Forbes noting that the Commission and those member states with the biggest financial centres - Britain, Germany and Luxembourg - have long resisted any idea of a single European financial regulator. But, it adds, "EU history shows such taboos can be broken in response to crisis."

Impinging directly on Cameron's concerns, and ambitions, the commission is therefore considering "giving" home-country authorities greater say "over how much total capital banks must hold to guard against losses," with the EU's Committee of European Banking Supervisors in London mediating disputes between regulators.

"The challenge ahead is to maintain this momentum to deliver the full principle of consolidated supervision," says the European Banking Federation in Brussels. The group, we are told, "strongly welcomes the planned amendments" to supervisory arrangements – thus pointing the way for the battles ahead.

And, just to underline the increasing dominance of the "elephant" in financial services, we learn via Reuters, that the EU commission has graciously received notification from the British authorities of their rescue package for mortgage lender Bradford & Bingley.

"The Commission intends to adopt a decision very, very quickly. I cannot give any comment on the substance of the measures in the plan," spokesman Jonathan Todd said.

The "elephant" is very firmly in charge.