The awkwardness of truth 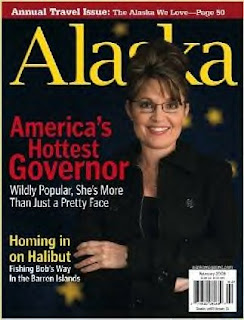 A number of blogosphere commentators on the other side of the Pond have been warning the Republicans and their growing band of supporters not to repeat the Democrats' mistake and create a cult of personality around Governor Palin. I think they are right. Nobody deserves a cult of that kind and the lady is bound to make the odd mistake or two before November. Not the one about Freddy Mac and Fannie Mae. As it happens, she was right as it was confirmed by the latest news. And no, I am not going down the route of trying to explain what either of the FMs is about but I did see that they are being, in effect, nationalized.

The Obama cult has backfired quite spectacularly, arguably, because of the many problems with his personality, connections and political background, which was not really investigated by the MSM that is now proudly throwing everything at Sarah Palin and her family. If the McCain/Palin ticket emerges victorious in November, it will be at least as much because of Senator Obama, his campaign and most of the MSM, which has appointed itself to be his promoters as Governor Palin and her personality.

Somewhere in this extraordinary presidential campaign lies the reputation of the MSM, becoming more and more tattered by the day. It took a bad knock in the last campaign, what with "Rathergate" and the growing strength of the blogs. This time round there has been no doubt - the media in its overwhelming majority is not even pretending to report matters fairly or accurately.

Several other problems have emerged: the sheer unadulterated viciousness of the left, which has transformed its Bush Derangement Syndrome into Palin Derangement Syndrome without blinking an eyelid; the mysogyny of a good section of the Democratic Party and of the self-appointed "feminist spokespersons"; and the astonishing (for America) display of class snobbery, again among a number of the left. This is something we are used to in Britain (remember the sneers about the "grocer's daughter?") but the United States is the place where anybody can make it to the top and, in fact, the support that is streaming towards Governor Palin proves that very many people do feel that way.

While we are on the subject, let me make a comment about those community organizers among whom the Obama supporters are now claiming Jesus Christ. The thing about Obama is that he was an outsider appointed by a politically minded organization to go in and organize the locals. Sarah Palin started her political career in the PTA. In other words, she was a real community organizer in the traditional bottom to top American mould.

At present the MSM's feeding frenzy is playing into the Republicans' hands and one wonders why journalists who must have a few connecting brain cells between them cannot see this. Even Oprah Winfrey is suffering.

The blogosphere being what it on the other side of the Pond, the fight is on. Glenn Reynolds, not a particular fan of Palin's I think, is updating the twisting saga; there is a Sarah Palin Sexism Watch blog, which carefully explain what is and what is not sexism; and best of all, Charlie Martin dealing with all the Palin smears and rumous, separating fact from fiction.

However, there is not much about her biggest achievement and that is the famous pipeline negotiation with Canada. Alaska, as it happens is unique among American states in that it borders with two other countries, one friendly (mostly), Canada and one distinctly unfriendly, Russia. If there is one American politician who knows about Russia it is the Governor of Alaska and that might come in very useful in the next few years. (Don't believe me? Have a look at the map.)

As of today even British readers will not be able to complain that they know nothing about Governor Palin except for her hair and her spectacles (subjects of vitriolic criticism by two left-wing feminists on last week's "Any Questions"). Today's Daily Telegraph carries an article by Jim Bennett, the premier Anglospherist and author of "The Anglosphere Challenge". In this he explains exactly what happened to Alaska's oil and how Sarah Palin in various political incarnations, challenged the existing and rather corrupt political establishment, negotiated the pipe deal and ensured that Alaskan oil benefited the whole country and, especially, the people of that state. [Warning: some of the comments on the article are staggeringly stupid and ignorant.]

The surprise is not that she has been in office for such a short time but that she has succeeded in each of her objectives. She has exposed corruption; given the state a bigger share in Alaska's energy wealth; and negotiated a deal involving big corporate players, the US and Canadian governments, Canadian provincial governments, and native tribes - the result of which was a £13 billion deal to launch the pipeline and increase the amount of domestic energy available to consumers. This deal makes the charge of having "no international experience" particularly absurd.

In short, far from being a small-town mayor concerned with little more than traffic signs, she has been a major player in state politics for a decade, one who formulated an ambitious agenda and deftly implemented it against great
odds.

Her sudden elevation to the vice-presidential slot on the Republican ticket shocked no one more than her enemies in Alaska, who have broken out into a cold sweat at the thought of Palin in Washington, guiding the Justice Department's anti-corruption teams through the labyrinths of Alaska's old-boy network.

Over on Chicagoboyz, there is a good discussion of the article, started by Lexington Green's posting.
Posted by Helen at 13:32