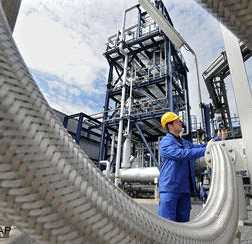 "A frisson of excitement" would be something of an exaggeration, but it is fair to say that a certain amount of interest has been generated by the news of the commissioning of a new, experimental carbon capture plant in eastern Germany.

As reported by Deutsche Welle, the Swedish energy utility Vattenfall has invested €70 million in the plant to service a 30 MW lignite-burning power station at Schwarze Pumpe in the Lausitz region of eastern Germany.

The carbon dioxide emitted, at a rate of nine tons per hour, will be compressed and pumped into deep, porous rock in a gas field in northern Germany. The process is considered economically viable because the emissions can be offset against the costs of having to buy carbon permits under the EU's emissions trading scheme (ETS).

No figures are given for increased fuel consumption, although the German conservation group BUND argues that the process carries a 10 percent penalty. Other sources suggest up to 25 percent fuel increases with as much as a 60 percent hike in operating costs compared with conventional coal-fired generation.

This unit is very much a pilot and Vattenfall now plans to build two "demonstration plants" 10 times that size in Germany and Denmark by 2015. It then aims to commission its first "large-scale CCS power station" in 2020.

However, no estimate is given for the cost of a full-scale plant although it is likely to be expensive. The best UK comparison we have is the abortive Peterhead scheme which was set to cost £500 million to service a 350 MW gas-fired plant.

This effectively doubles the capital cost of a generating plant which with the additional fuel and operating costs – offset only by the "snake oil" ETS certificates – makes it something of a bad deal, even ignoring the utter fatuity of attempting to reduce carbon dioxide emissions in the pursuit of limiting "climate change".

Despite all this, there might be some sense in Germany adopting the technology if it enables generators to continue using stocks of highly polluting but cheap lignite, staving off the day when it has to import all its coal stocks and perilously increasing its energy dependency.

For Britain though, there is no sense at all in carbon capture. Apart from the massively increased costs, the additional fuel consumption increases our dependence on imported coal supplies. With 22 million of the 52 million tons of coal we use for electricity generation imported from Russia, the very last thing we want to do is add to that for no gain in supply capacity.

With all that, one would have thought that a future Conservative government might be somewhat less than enthusiastic about the idea. But, if the comments of Tory energy spokesman Alan Duncan are any guide, the reverse is the case.

As retailed by Conservative Home, we learn of a pledge to fund a minimum of three CCS plants in the UK. Besotted with the idea of becoming technology leaders in this field, Duncan sees this as an "enormous economic opportunity for the UK" as well as an "environmental necessity".

With China and India leading a world revival in coal burning, he avers, we can export carbon capture technology, adding: "That's the sort of policy ambition that UK plc needs to secure competitive advantage in the new energy economy."

Thus it seems, the Conservative Party has become infected with the enthusiasm of europhile greenie MP Tim Yeo, and we are committed to this madness regardless of cost – MPs receiving a handsome contribution towards their electricity bills from the taxpayer.

But, if Duncan really wants an export opportunity on the back of emission-free electricity production, he should be looking at reactivating our nuclear industry, and in particular pebble bed technology. Already, South Africa is edging closer to building a commercial scale unit in Koeberg near Cape Town, with the signing of a $242 million construction contract last month.

The go-ahead has been given for fuel production and talks are being held on developing the system for producing synthetic fuels.

We know also that China is at an advanced stage in developing pebble bed technology, France is pursuing the system and the United States is taking an increasing interest. The US Idaho National Laboratory is working on its own version of the design.

A particular advantage of the system seems to be its ability to provide high-temperature heat (up to 950°C), which can be used for a range of industrial uses such as fertiliser production, shale-oil recovery and coal-to-liquids, as well as hydrogen and electricity production.

With such dynamism elsewhere in the world, the failure of our current government to get to grips with the technology is bad enough. Nevertheless, we have come to expect nothing better from this tired and failed administration.

But, when the knee-jerk Conservatives seem enthused only by useless, dead-end technology like carbon capture and have singularly failed to address the nuclear challenge, it seems that there can be no optimism at all that our growing (but entirely unnecessary) energy crisis is going to be resolved.