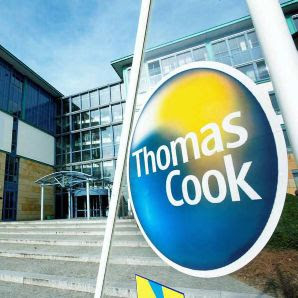 Something that may be aired in the MSM this week, flagged up by Reuters, is the outcome of the case before the ECJ for a ruling on Tuesday, which may leave the travel company Thomas Cook a half billion pounds richer.

The case itself stems from an earlier judgement following intervention by the commission in 1999 when it stepped in to prevent a merger between MyTravel - then known as Airtours and now part of the Thomas Cook empire - with First Choice Holidays.

The ECJ delivered its ruling on that in June 2002 – against which the commission did not appeal - confirming that the commission had been wrong to bar the merger. The issue now before the court is whether Thomas Cook is entitled to compensation.

Thomas Cook argues that it is entitled to damages to cover the costs incurred in the original bid, the profits of First Choice in the period up until June 2002, and the value of the synergies which would have been produced by combining the two businesses.

The court will also rule on the commission's refusal to allow MyTravel to see documents used by Brussels competition officials in dealing with Airtours, underlining the pathological secrecy of this department when it comes to its dealings with the companies it regulates.

Within our Brussels government, the competition directorate is one which wields enormous power, with the ability to block take-overs and mergers, such as in the MyTravel case, and to levy massive fines for alleged anti-competitive practices.

Its actions are entirely beyond the jurisdiction of member states, with only the ECJ to hold it in check – something which Microsoft found afforded little relief.

And while the ECJ can award substantial damages, this is not a body that will look too closely into the affairs of the directorate. Nor will it censure any officials who, if the claim is successful, will have cost the taxpayers of the member states a substantial amount of money.

That something more than a simple judgement is required is perhaps indicated by the recent Sunday Times story which revealed yet more corruption within the commission. With this case, as with many others, we cannot tell whether straighforward incompetence was involved or whether this was also corrupt dealing to the advantage of unnamed persons or enterprises.

The fact that such a body exists with such huge powers and with no democratic political oversight is, of course, another reason why we should pull out of the whole edifice of the European Union – not that we really need this one on top of all the others which are so plainly evident.