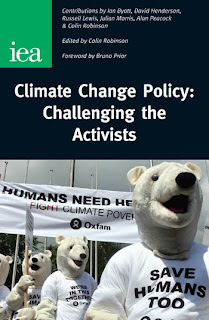 When The Guardian resident eco-freak (REF) takes time out – albeit not a lot – to have a swipe at the Institute of Economic Affairs (IEA), then something must be going on that is worth looking at.

And indeed there is. Today, the Institute published a pamphlet under the title, "Climate Change Policy: Challenging the Activists", which concludes that "climate policy has become subject to a quasi-religious mindset, driven by the desire to maintain consensus and defend its dogma, rather than seeking the best policy for the future."

You can see, therefore, why the REF takes such umbrage, complaining that most of the authors – six in all – "must be over 70". Remarkable, even by IEA standards, for its dullness and scientific illiteracy, storms the REF, it wonders if the authors should “rethink their outrage at society being asked to fork out about $25bn a year to tackle climate change, when it's costing governments several trillion dollars to tackle the dodgy bankers.”

It is interesting that the man should cite the figures in dollars and doubly interesting that he – like so many of the warmists, from Stern onwards, seek publicly to downplay the costs of dealing with their obsession.

Yet, the whole essence of green taxes, carbon trading and the rest, is to price fossil fuels out of the market by making them so expensive that "green" substitutes become more attractive. A "mere" $25bn a year, therefore – or whatever the obsession is actually costing us – is only a down payment. Costs will increase because they are designed so to do.

Anyhow, the thesis expressed by the "IEA six", admirably expressed in the press release - which will save idle journalists having to read the pamplet – is that the policy focus "should shift to market-based adaptation, not hairshirts and witch hunts."

Government intervention, say the authors, is likely to harm our economy and unlikely to save the planet. Implementation of the Kyoto Protocol has already caused economic damage and a government-led approach "would impoverish us economically, damage individual freedom" and, paradoxically hamper our ability to deal with climate change.

Thus, in classic IEA style, the response should be left to the markets, which can be left to exploit future technological advances and respond to the situation as it develops. As a long-stop, however, the authors concede that there is a role for "modified" carbon taxes which would be used for an insurance-based "climate catastrophe fund" to pay for remedial geo-engineering projects if the need arose.

One must admire the constancy of the IEA and its faith in markets. However, recent experience would suggest that the markets' main concern is to get into bed with government and devise ever more ingenious mechanisms for ripping-off the consumer/taxpayers and enrich themselves on the proceeds.

On this, unfortunately, the IEA has little to say, which is a pity. When so much money is up for grabs from rigging the markets, few are going to be interested in the IEA's idea of a truly free market response.