The blindness of the political classes 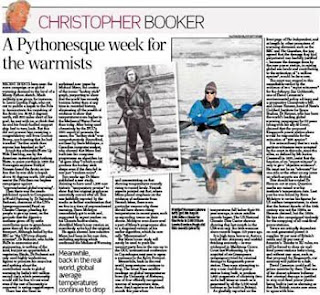 With the onset of the conference season, and the impending Labour Party Conference, the political correspondents and the chatterati are engaging in their usual displacement activity, immersing themselves in the soap opera of the challenge to Brown's premiership.

That Mr Brown is not going to be forced out of office has been evident ever since the prattling classes first latched onto this source of entertainment, but it does not stop acres of extruded verbal material being published, and hours of idle speculation being broadcast.

So it is that there is that ever-increasing divide between ordinary people and the political classes, built on the fundamental confusion about the nature of politics. Where the chatterati believe that politics is about politicians they have lost sight of the fact that the subject is about policies, the choices about how we live and are governed.

Thus, the chatterati version of politics becomes dominated by the sterile soap opera of "politician's lives", in a policy-free environment where major issues are hardly discussed and then only in terms of how they can be milked for short-term partisan advantage. Things like energy, for instance, become merely props to add colour to the ongoing story lines.

So it is that Booker in the "real world" ghetto of his column addresses surreal attempts of the warmists to bolster their bizarre religion, and comments on the Greenpeace activism which is set on closing down coal-fired generation in this country.

It is that last issue, particularly, where the political classes have run for cover. Despite Booker's pieces on "climate change" and related issues regularly appearing in the "most commented" lists, this is a subject that the political classes cannot and will not deal with. They have their soap opera and they are not going to be diverted from their navel-gazing. They are not going to engage in this debate – they do not understand it and it terrifies them anyway.

Thus, we observed earlier this week an "entertaining" discussion under way on Conservative Home about whether David Cameron was a "lightweight".

Of the many commentators, Tony Sharp – and a very few others – made the obvious point about energy policy, Tony subsequently reinforcing the point on his blog. If he needed to demonstrate "heavyweight" credentials, Cameron could do no better than come up with a substantive energy policy.

Even a couple of days before that piece, we would have agreed completely but with the Greenpeace acquittals and the involvement of Zac Goldsmith as a witness in support of the vandals activists, the ante was upped considerably. To retain any credibility on this issue, Mr Cameron must publicly distance himself from Goldsmith and make it very clear where he personally stands on the energy issue.

Of course, in his Westminster bubble, engrossed in his own version of the soap opera, he cannot or will not. And with those surrounding him equally engrossed and detached from reality, we will see the gap between the concerns of ordinary people and those of the political classes increase exponentially.

It cannot therefore be unrelated that, as we learn, beat constables are to be issued with Taser stun guns. They are going to need them.