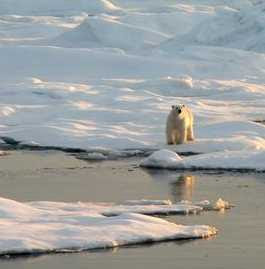 Courtesy of Watts up with that we learn that the ice melt in the Arctic is "officially" over. We are left with 9.4 percent more ice than last year, when the meltback reached the lowest level recorded since 1979.

This is somewhat later than my own premature announcement and it may or may not be significant. It could be just a blip in the current cycle of extended melting or it could be the turning point, signalling – along with other indicators – a return to cooling.

Either way, this could be of interest but, for the majority of people, they will never be given an opportunity to ponder over the importance or otherwise of this information. The bulk of the MSM already got in first, such as The Daily Telegraph two days ago.

Obviously retailing a press release from the WWF (which has a financial interest in stoking up concern about "global warming" and dying polar bears), the paper headlined, "Polar bears 'could become extinct' because of melting ice, scientists claim". Written by Louise Grey, the story then told us that, "Polar bears and other rare species are in danger of dying out, scientists fear, as latest figures show the Artic (sic) sea ice is at record lows."

The "scientists" (plural) turn out to be one man, a campaigner for WWF who rejoices in the title of "senior climate change advisor" at WWF International's Arctic Programme. This is Dr Martin Sommerkorn, who makes a living out of donations from people concerned about dying polar bears. Yet he is allowed to say, entirely unchallenged:

We are expecting confirmation of 2008 being either the lowest or the second-lowest year in terms of summer ice coverage. This means two years in a row of record lows since we started recording Arctic sea ice coverage. The trend of melting Arctic sea ice is alarming for the rest of the world. The Arctic is a key factor in stabilising the global climate so this is a global problem that demands an immediate and global response.

Then we get this gem:

Arctic ice is like a mirror, reflecting the sun's heat back into space. As that ice goes, Arctic waters absorb more heat, adding to global warming. Warming of the Arctic will soon release more greenhouse gases from the Arctic that were previously locked in permanently frozen ground.

Er … The Arctic is an ocean? And how is the melting of ice going to release more greenhouse gasses?

Anyhow, the point is that that this and many other papers are not going allow their readers to speculate that the ice might not be at risk after all or that the polar bears really are quite safe, their populations having increased to record levels.

In its current piece The Telegraph gets Walt Meier, a research scientist at NSIDC, to tell them what is going on. He thinks:

… this summer has been more remarkable than last year, in fact, because last year was had really optimal conditions to melt a lot of ice. We had clear skies with the Sun blazing down, we had warm temperatures, and winds that pushed the ice edge northwards.

We didn't have any of this this year, and yet we still came within 10 per cent of the record; so people might be tempted to call it a recovery, but I don't think that's a good term, we're still on a downwards trend towards ice-free Arctic summers.

Meier adds that last seven years are among the seven lowest on record in terms of Arctic sea ice, telling us, "That's a real indication that this isn't any kind of temporary climate cycle. It's more an indication that we're heading toward the point where we're going to have that sea ice completely melt in the coming decades or perhaps sooner."

So there you are – whatever the news on "climate change", it can only point in one direction. And even though the ice pack is larger than last year at the end of the melt, this obvious indicates that it is going to melt completely in the coming years. That is the "climate change industry" (CCI) for you, protecting its own interests, with the wholehearted support of the MSM.