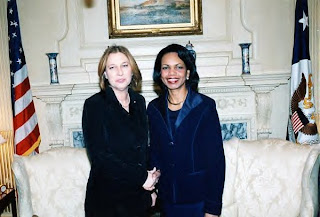 Never mind the American elections or Gordon Brown's travails that will come to no conclusion until spring 2010. From Israel comes the news that the new Prime Minister is the now ex-Foreign Minister, Tzipi Livni.

She won the leadership election of the Kadima Party by 431 votes or 1.1%. (How different from the political lives of former President, now Prime Minister Putin and his teddy bear, President Medvedev. No wonder the latter appeal to the likes of Peter Hitchin and other supporters of strong government.)

Ms Livni has 42 days to put together a coalition government. In the meantime, Ehud Olmert, a man who is not only facing various charges to do with financial malpractice but has also been, by a general agreement, the worst prime minister Israel has had in its history.

The Times says that she is being touted as the new Golda Meir. That is quite a claim for anyone. We shall see. She has shown herself to be fairly tough in politics but will she be able to stand up to bullying by "world opinion"? Above all, will she finally start looking at the propaganda war that Israel has been losing steadily for some time?
Posted by Helen at 12:06