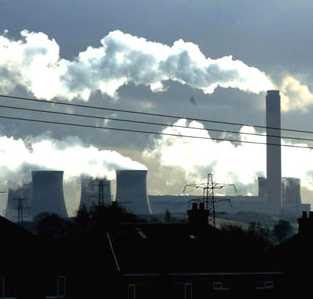 If anyone has been thinking that we are exaggerating about the looming energy crisis, read The Times today.

It tells us that, yesterday, "the crumbling state of Britain's electricity network was exposed" when power station breakdowns caused the first energy shortage of the autumn. National Grid was forced to call for more power from electricity generators after a series of unexpected breakdowns left the company with an insufficient safety cushion.

The company requires a safety cushion of between 2,000 and 4,000 megawatts above peak demand. When it fell short yesterday, power suppliers were asked to bring all their available generating capacity online, including expensive oil-fired units.

The problems were caused by a loss of power because of breakdowns over the past two days. Some of the plants that experienced problems included British Energy's Eggborough power station, Drax (pictured) and E.ON's Kingsnorth and Killinghome stations.

Whether it was a coincidence, we do not know, but here in Yorkshire we suffered a short outage – of about half an hour – yesterday. Perhaps it was to put us in training for the events to come.

Neither is that experience unique in recent times. Readers will remember that, on 27 May, tens of thousands of consumers suffered electricity blackouts in what was then described as Britain's worst power shortage for ten years.

There was no immediate risk of major outages yesterday, as the National Grid was able to forecast the problem. But "analysts" were nevertheless expressing concern about the state of the electricity generating infrastructure.

Words like "crumbling" and "inadequate" for 21st-century use have been bandied about and The Times is retailing industry estimates that it will need to spend "£100 billion building a new generation of power stations."

Actually, that is most likely a very serious under-estimate. Our calculations suggest that just the investment needed to meet the EU’s 20 percent renewables quota is likely to cost £100bn, a figure recently endorsed by E.On.

Then there are the costs of replacing the base capacity knocked out by the EU's Large Combustion Plants Directive and the investment needed to bring in new nuclear capacity as Britain's ageing nuclear plants are retired. Add to that the costs of upgrading the National Grid and it is very unlikely that there will be that much change out of £200bn.

Whatever the precise figure, David Porter, chief executive of the Association of Electricity Producers, told The Times: "We are reaching a point where we will have to spend more on infrastructure than has ever been done before in this country."

Putting yesterday's events in perspective, however, it has to be said that Britain's power capacity is generally reduced during the summer for maintenance. Most companies do not return to full generating capacity until after the clocks are turned back an hour in the autumn. This, therefore, exacerbated the problems.

It does affirm, though, that we do have a system on the brink. No end of industry experts have told me that on numerous occasions, the entire Grid has been on the point of collapse and this report simply reaffirms that which we already know.

Meanwhile, yesterday in a speech to the Scottish CBI, Gordon Brown was still prattling about "a low-carbon society", wind energy and his "pilot scheme" for electric cars – which can do nothing other than increase the burden on an already strained supply.

Yet, from the opposition parties, we get nothing.

The whole scene is now shaping up in just the ways predicted in my book "Out of the Energy Labyrinth." In that book we forecast that energy security would become the prime issue and that the so-called "compelling" message of Al Gore and others about climate change and CO2 would simply be pushed off the screen. Unless policy-makers understood this, we said, they would end up with no long term CO2 reductions, huge short-term energy security problems and a lot of very angry and frightened people.

One is tempted to highlight the words "a lot of very angry and frightened people." The smug, half-witted, terminally complacent political classes do not even begin to realise what is coming. But, when the people find out quite how they have been shafted, they will be very angry indeed.

Then, I will make no attempt whatsoever to resist the temptation to say, "I told you so". I did – many others did – and the political classes weren't listening. They will deserve exactly what they get and I will get a vicious satisfaction from watching it happen.