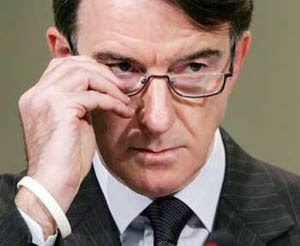 On matters of trade, and especially WTO affairs, Ronald Stewart-Brown is one of the commentators worth reading. In this month’s edition of The European Journal (no link), he writes about the failed Doha round. What stands out from his piece is this section:

… it needs to be emphasised, the UK no longer has any meaningful existence in the world of international trade negotiations as it has ceded Brussels controls of most aspects of its trade relations with third countries apart from currency and trade promotion. While she retains nominal WTO membership, it is now in reality little more than a region of the EU in trade policy terms, with the periodic right to nominate one of its nationals as EU trade commissioner.

Stewart-Brown thus highlights something very few people understand or appreciate. Not only has much of our government moved to Brussels, so has much of the expertise in policy-making and development. The best and brightest no longer work for Whitehall. In trade as in other areas, the British government does not "do" policy – it merely reacts to and then implements policy developed in Brussels.

The same goes for academia. Traditionally, the intellectual reservoir of the nation, contributing much to the development of policy in many areas, the money no longer comes from Whitehall but from Brussels. If a department is to attract research funding – the lifeblood of most universities – it is absolutely pointless offering national policy solutions. Unless the work has a "European dimension" – often tied in with other European "partners" – it will remain unrewarded.

Thus has an important facet of public administration been hollowed out. But, because it was never highly visible, its loss is hardly noticed – except in its insidious consequences. EU policy dominates because we have lost much of the capability of making our own.

So continues the invisible takeover, one which is all the more dangerous for being unseen.